Ever since deciding to focus the rest of my year on smaller races, I have registered for a couple that I’ve never done before. The first on the list is a race that is run over at Battle Creek Park in Saint Paul, called the Bluff Tuff Trail Half Marathon. It’s a part of the Urban Trail series put on by Endurance United, an organization that seeks to get people active in endurance events. They have a large focus on cross country skiing, but they also put on some trail races.

In previous years this even was known as the Twin Cities Urban Trail Marathon, as it wound through the park, as well as along various paths on the Mississippi riverside. Because of the difficulty in putting on such a big event, they chose this year to focus on just the half distance. To add some excitement to the mix, a month before the race, they were informed that some of the paths that they wanted to use near the river would be closed. This meant that instead of a point-to-point race, ending at Flat Earth Brewery, they needed to confine all 13 miles inside the park.

This was my first time running at Battle Creek, so I had no idea what to expect. What I found is that there was no trouble at all finding all kinds of trails and singletrack in which to put on a long race. However, it required a lot of noodling around, and it appears that some of the course marshals had to alter signage as the race went on to accommodate getting people going in the right direction. I didn’t mind the course at all, as it combined a lot of really cool elements, and despite the compact nature of the park, I never felt like I was just running back and forth or in circles.

The weather today called for rain, and there was even a slight chance that the race could get cancelled for severe storms. Thankfully, all we ended up with were some mild showers. Partway through the race the sun even poked through the clouds for a few brief moments. I wore a long sleeve shirt, and most of the time I didn’t regret it. When the sun peeked out I started feeling like I wish I had short sleeves, but I managed to just pull up my sleeves a bit more to cool down.

We launched at 9:15am, and I settled into a nice easy pace as we entered some double-wide grassy areas. My training has been very minimal this year, and so I knew I needed to just take it easy and enjoy the day. I’ve had five runs this year over 12 miles, and 4 of those were races. Today was going to be a bit of a challenge for my physically, but I feel like I still have a lot of mental fortitude from the past few years of achievements.

As we wound around Battle Creek, I was struck by just how beautiful this park is. I grew up in east Saint Paul, but we usually spent our time up by Lake Phalen. I rarely had reason to come down to Battle Creek. What I discovered today was an amazing set of trails that I’m going to have to spend more time visiting. The amazing thing about this park is that it’s just a couple miles outside of Downtown Saint Paul. In the selfie below you can see the outline of part of Downtown over my shoulder. The picture makes it look further away, but you could easily run there from this park. It’s amazing to have this so close to an urban core.

As the race wore on my body started to feel more aches and pains that I normally do. This park, and this course, includes a LOT of elevation for a city park. When all was said and done I got almost 1300 ft of elevation change over the course of the 12 miles (more on that in a bit). To compare, this is just a few hundred feet less than places like Afton and Zumbro. It’s awesome to know that I don’t need to travel all the way out to Afton for some hill training if I don’t want to.

Once I had completed a particularly rugged section of singletrack around mile 9, I found myself on some pavement for a bit. It wasn’t very long, and frankly, just getting to run on flat ground for a half mile was a nice change of pace. Soon though we were right back at it, with an amazing climb up some switchbacks to get back on top of the bluff. By this point in the race my hamstrings were killing me, but I knew I didn’t have too much further to go. 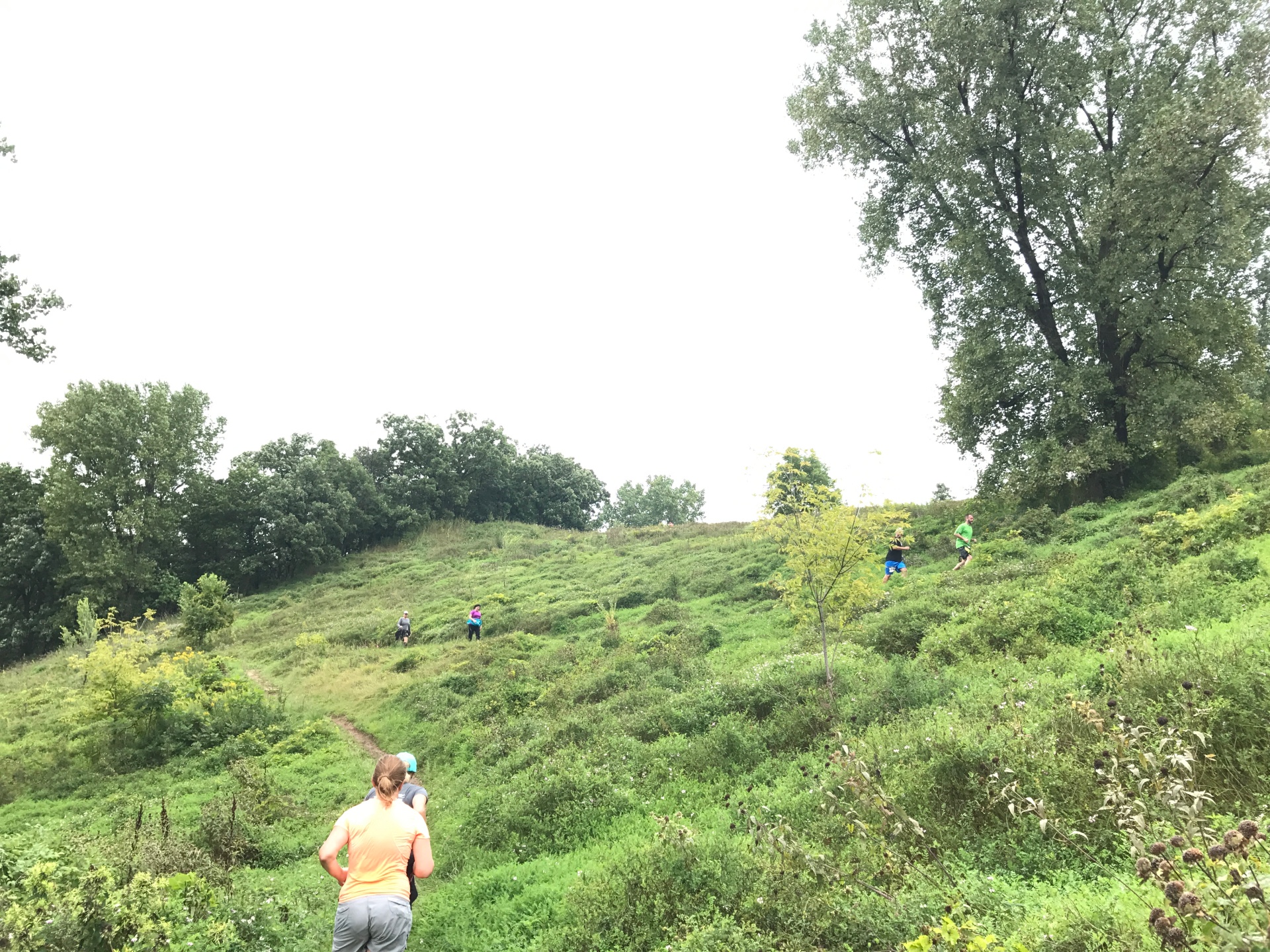 The distance was a bit of a confusing factor to the race. The mile markers, and the maps, showed a solid 13.1 distance. However, as the race wore on, my watch and the mile markers started drifting. By the end, I was a full mile behind where the markers said I should be. I took a look at a half dozen other Strava users who ran the race and every single person finished around 11.5-12.2 miles. What this tells me is that the original measurement of the course was probably off (perhaps old GPS?). I know for many of the road runners in the race, that might have been a big deal. As a trail runner, I really didn’t care. As long as I get a fun course, that’s somewhere in the ballpark of what I want to run (distance-wise), I’m cool.

Once I got on top of the hill, I managed to get a bit more running in, but I knew I was reaching the limit of what my training had prepared me for. I noodled around the upper section, following the flags, and saw the finish line in the distance. We had to round a small pond before we finished, and (at that point) it felt like the biggest pond in existence. As I approached the finish line I heard the Race Director Andrew announce, “The beer garden will be closing soon! Last call for beer!” You bet I ran like hell at that point. I rounded the finish line (2:50 finish) and made a beeline for tent.

As I stood in the garden, drinking my beer and waiting for my wife to finish, I felt my calves start to protest. I took every opportunity that I could to stretch the out, because they were just about ready to cramp up hard. Thankfully, I didn’t have to wait too long for her to round the corner. I finished my beer, had a brief chat with RD Andrew and we headed out to get on with our day.

I’m so glad that I’ve decided to scale back my running this year. This race was tough, and a challenge, but I had a ton of fun, and I enjoyed myself. Sure it wasn’t an ultra distance on the north shore, but it was a beautiful urban course, with a lot of great hills and trails. Having fun with this is what matters the most, and I’m happy to say that getting to run this amazing race in the city where I grew up was awesome. Tonight, I’m very sore, but happy and fulfilled. This was a great race in a great place, and I’m thankful I decided to give it a shot.

I spent the last week volunteering at Arrowhead 135, but was excited to get back to the regular routine at the Creek. When I’m volunteering for days my sleeping and eating takes a big hit. I felt it on the 9 mile run today as Beth and Mike were feeling much better, and graciously pulling me along. In the end it was a solid run and I survived just fine.
Erik Raivo as our DFL at Arrowhead 2023 #arrowhead135 #winterultra
I got a chance to head out and shoot photos of the participants roughly 3-4 miles into the race. Missed the lead bikers, but should have almost everyone else in here. #arrowheadultra135 #winterultra #racephotography
Properly cold January run this morning. #trailrunning #icebeard
Finally spending a normal weekend at home and getting in a solid run at Elm Creek with the gang. Good to be in maintenance mode right now before training kicks in later in February.
Race report is live on the blog (link in bio)! This one's a bit long, but it was a long adventure!
Loading Comments...
%d bloggers like this: