So far this winter, the Twin Cities are down 18 inches of snow that we should have gotten. It’s made for a very dry year so far, and it’s probably going to have big consequences later in the year. Thankfully, today we’re getting a bit more of the white stuff, although only a couple inches. At least it’s something to cover up all the gross dirty stuff that’s half melted.

I got this shot when walking in the skyway in downtown Minneapolis. I love turning snow pics like this into B&W. It tends to evoke a much stronger emotional response when you see a cold winter day with snow falling, and it’s just dark vs light. 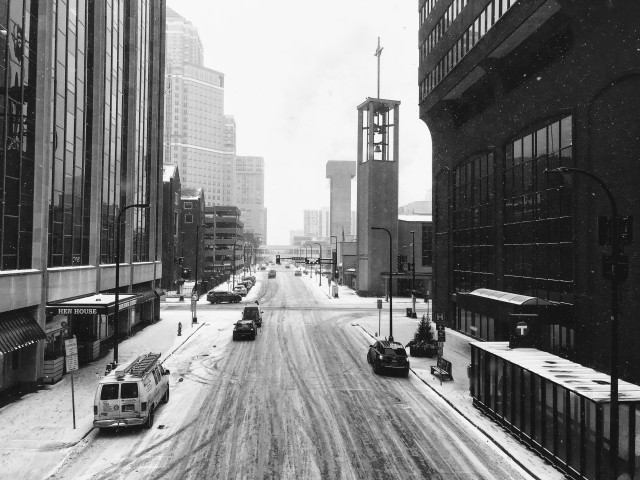 After a few days of really heavy posts, I’m going to keep it light today. I had a meeting on a higher level floor in downtown Saint Paul, and it happened to be gently snowing. Instead of a picture I decided to take a nice little video of the snow falling over the new Treasure Island Center (formerly Macys). A gentle reminder today about how even a bustling downtown can be beautiful in the right conditions.

Friday night I was out late marking the trail with friends, for a fun run on Saturday. As we finished up the evening we headed to 10K Brewing in Anoka, and on our way it started to snow. We had a couple beers and then I called it a night. As I left I looked at the beautiful snowfall, and the quiet, peaceful, serene, evening and snapped the pic below. There’s nothing like a cold snowy night in Minnesota. 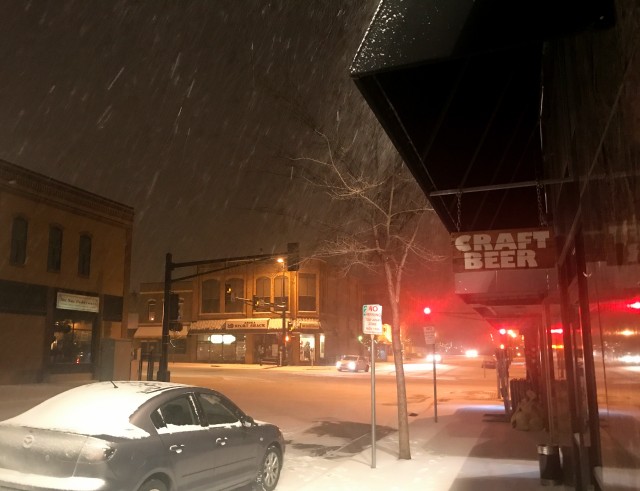 Looks like Minnesota is getting one last big winter storm of the year this year. A couple days ago I was riding with my moon roof open. Today, it’s snowing.

Thankfully, it is looking like the metro area will be spared much of the snow, but down south they’re getting seriously hammered. It was truly bizarre today as I drove home from downtown. The snow simply stopped when I got into the north metro. Not just tapered off, but stopped.

This snow is good news and bad news for me. The good news is that my commute was pretty easy because I live on the north side. The bad news, is that my trail race in 15 days is going to be covered in 12 inches of snow. Even if we get back up into the 50’s for temps, that means we’re going to end up with a nice muddy mess.

I guess I shouldn’t be surprised. Spring trail races are muddy, that’s just the way that it goes. I pretty much embrace the mud anyway, but boy, one of these times it would be nice to not have my shoes completely coated in dirt! 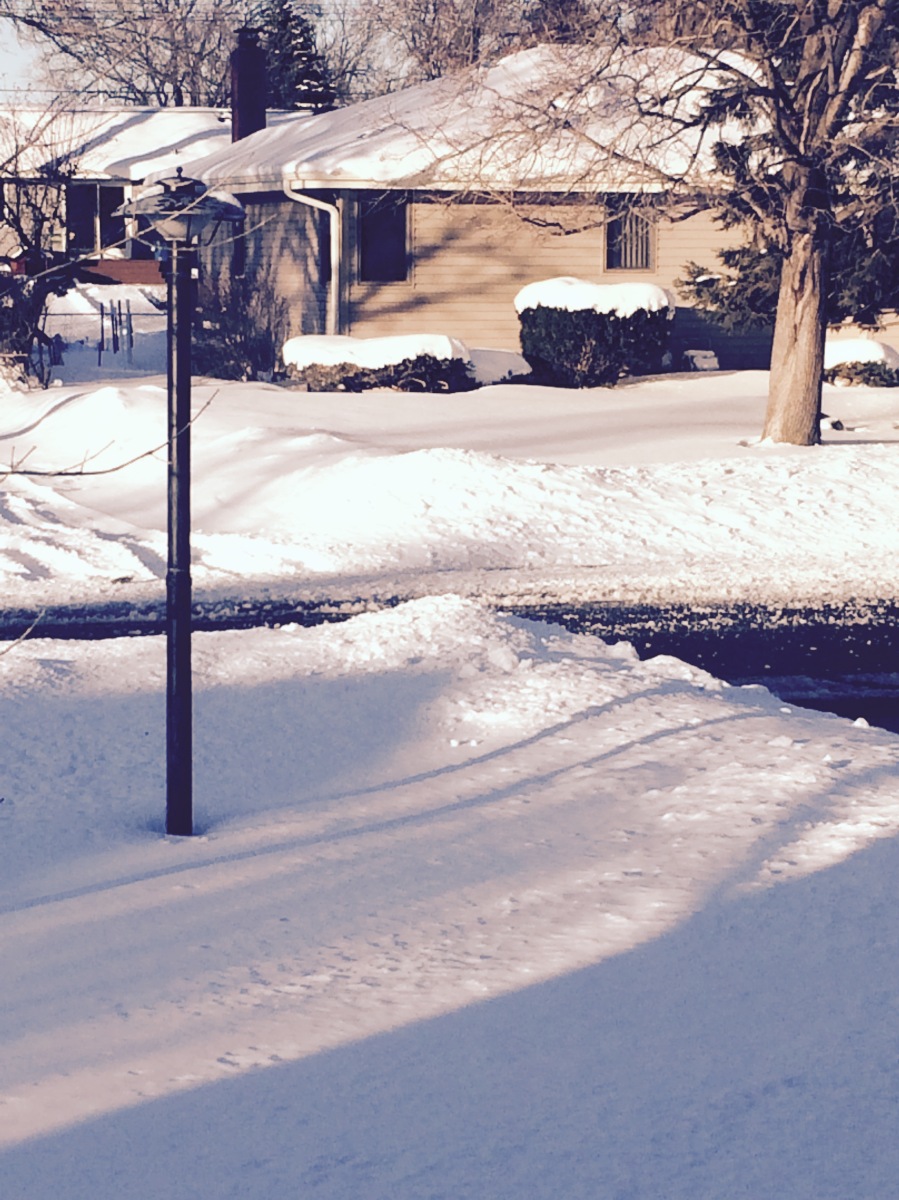 When the snow finally stopped, there was 9 inches of fresh powder on the ground. Despite the headache and hassle of trying to get around in it, a blanket of snow is very beautiful. The day after the blizzard the weather turned sunny, and since we’re already in February, with the sun higher in the sky, there was a steady melt all day. Everything was shining and glimmering in the sunlight off of the crystallized layer of white.

Sunny days after a snowstorm are one of my favorite times to look at the world outside. The sun makes all the struggle and cold of the previous days, seem not so bad. There’s a contrast in looking at the land, covered in frozen water, but at the same time feeling the warmth of the sun on your cheeks. It’s as if there’s a war between the sun and the snow, and humans are caught in the middle, experiencing both.

It seems rarer and rarer for Minnesota to get large blizzards like this anymore. Climate change has altered our winters, and the 20+ inch snowfalls of my youth are a distant memory. Minnesotans seem to have remembered how to behave in a blizzard, and for the most part life was back to normal the next morning.

For a few brief moments though, the sun and the snow made the world seem a bit more magical. A bit more like the winters of storybooks, and exaggerated memories. Life returns to normal, the snow a simple meteorological nuisance in the middle of an otherwise normal week.