This recap will be hard to write. Not because I can’t find enough words to fill a page, but because editing this amazing weekend down to readable format will be difficult! If you’re looking for the TL;DR…. Amazing weekend, amazing community, amazing weather… 11/10… will do again.

I began my weekend leaving the Twin Cities shortly after lunchtime, early enough to avoid any traffic heading out of town. The Kwik Trip in Moose Lake has become a regular stop of us, and this weekend was no different. I grabbed a quick bite to eat there and then headed back on the road. I needed to make it to Two Harbors in time to help with packet pickup for the 100 mile runners.

When I arrived the place was buzzing with activity, and so I jumped in with whoever needed help. This time I ended up helping with the merchandise table. It brought me back to my old retail days in college when I worked at a camera store. Granted, it was easy to sell merchandise when it’s Rock Steady Running gear.

The night passed in a blur. I got to meet the incredible Ian Corless (who probably was chuckling at my fanboy attempt at smalltalk), as he once again took amazing portraits of the runners. We also got to enjoy a spaghetti dinner, and listen to John prep the runners for what lay ahead. We also got a preview of some amazing accomplishments that were about to go down at this years race. Once we finished packing up for the night I headed up to Tofte, MN where I had rented a house for the weekend.

My wife (and her mom) would be joining me on Friday, but my friends Mark and Mike we also coming up. On Thursday night Mark showed up around 11pm. Of course we didn’t go right to bed, and stayed up well past midnight talking about the race to come. Mark was also volunteering and pacing this weekend, and so we talked about timing and strategies for when he would meet his runners.

We finally crawled into our respective beds with the knowledge that our alarms would be going off way too soon so that we could get ourselves an hour down the shore to the start line by 8am. Being my first night in a new place, I also didn’t sleep solidly, so by morning I could tell it was going to be a wild weekend. I added a tiny bit of caffeine to my morning decaf, and hit the road.

I arrived at the start line with enough time to spare to get some great shots of the runners, and start the “social media” potion of my volunteer stint. I posted a few shots and then ran down the course to get video of the runners shortly after they started. It was amazing to see everyone fresh and excited about the adventure to come. As I left Gooseberry to head up to the Beaver Bay aid station I could see all the runners heading up the Gitchi-Gami for a couple miles before dumping onto the Superior Hiking Trail. It was amazing to see a steady stream parading up the coast.

I arrived at Beaver Bay and waited for the runners to start coming through. I was there early enough that I was able to talk with some friends, and got to meet Andrew, the RD for Marquette. I really need to get out there one of these years, and now that they’ve got an 11 mile version, I can probably sign up without fear of not being in 50K shape. Soon our leader (Neal Collick from Marquette, MI) showed up, blasting into the aid station with a massive lead.

I hung around for a little bit to catch the top 5, and then headed up to the next aid station Silver Bay. I needed some lunch, and by the time I finished eating and driving up the road, the leader had already passed by. Needless to say, he was flying. I knew that I would soon need to get myself up the shore to my aid station because he was on track to break the record for when he would show up there.

I made it to Tettegouche in time to snap a quick picture of the Aid Station crew to post on Facebook and then went to County Road 6 to get ready for the night. I arrived and found my boxes all where I expected them. Luckily Mike and Brook W. were driving by taking photos, and they decided to plant themselves at my station and help me get up and running. Sure enough we had barely gotten going when Neal Collick came barrelling down the road, a full 20 minutes ahead of our plan. 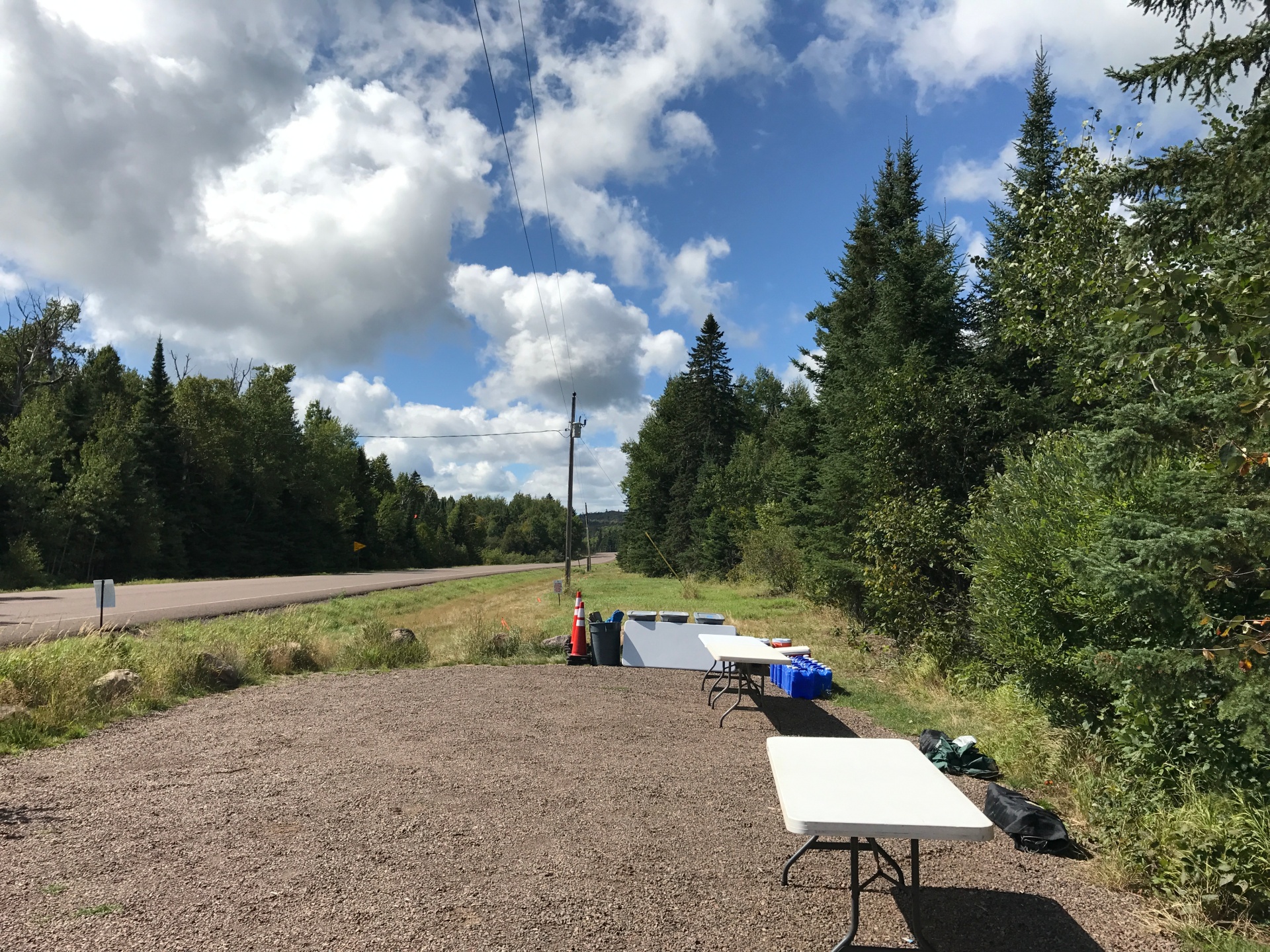 Thankfully, front runners don’t need much aid station help, as they have full crews, but we were thankful to at least have the basics ready for him when he arrived. Soon he was gone, and we kept getting prepped while we waited for the next runners to arrive. What began as a slow trickle eventually turned into amazing party that is the trail running aid station.

My volunteer crew arrived and I started handing out assignments and making sure everything was running smoothly. The road crossing crew (The 3M Dream Team) was out doing their awesome job keeping the runners safe, and Rob K. rocked the parking lot all night. I sent someone down to relieve Rob at one point and he sent them back because he was having too much fun blasting music from his car and enjoying a beautiful night.

As the night wore on the temperatures started to drop. As we got close to nightfall I looked up the weather, and latest forecast put our temps around 37 degrees overnight. I started telling crew and runners to make sure to plan ahead to have enough warm clothing for the next segment, and ensuring that everyone had their headlamps ready for the dark woods. Because of the cool temps, the runners were coming in faster than last year. I had over half the field in before sunset, and by darkness we had slowed the frantic pace to a more steady flow. 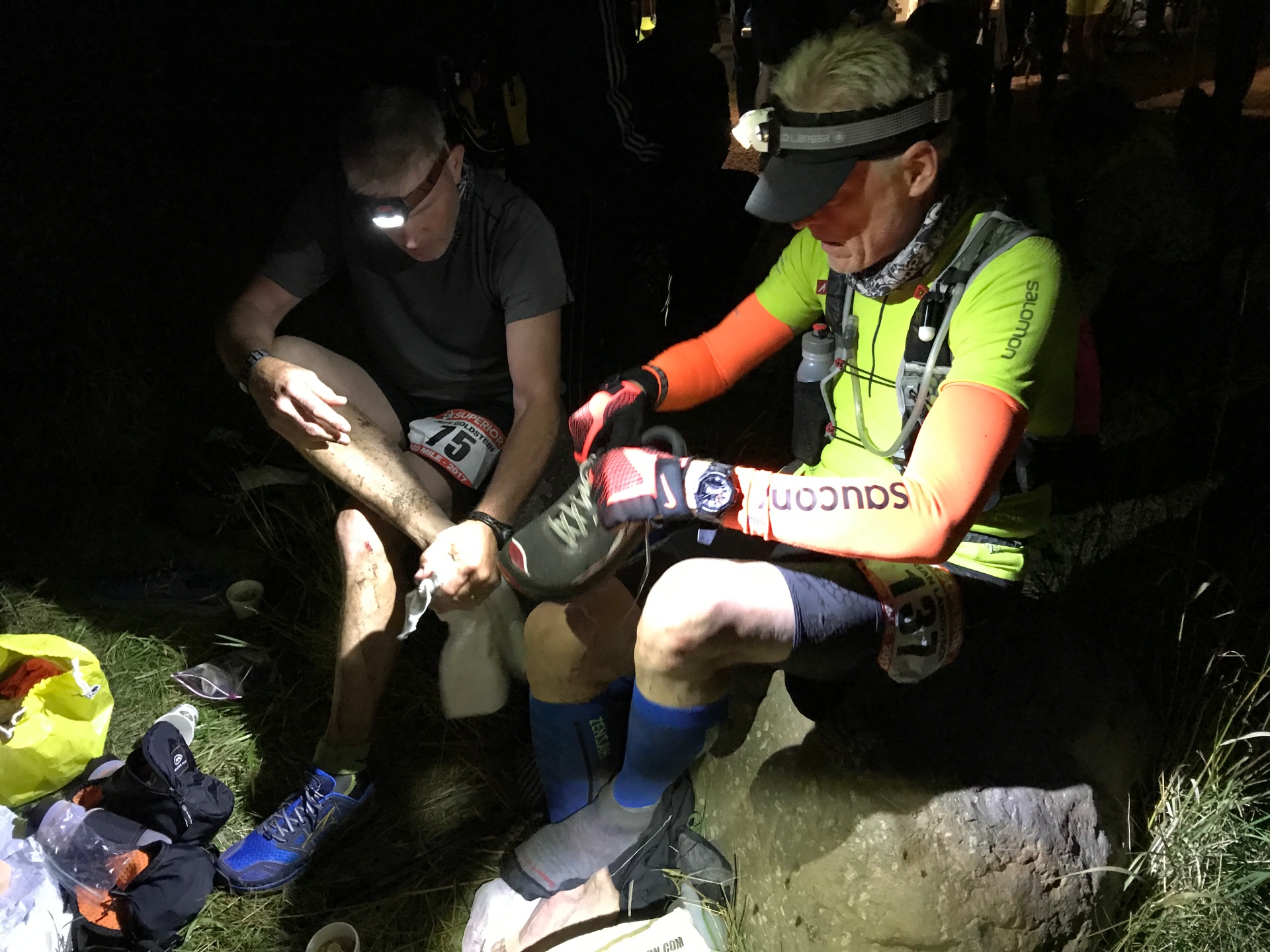 Working these aid stations is one of the most amazing things to see. Runners are coming out of the woods and into civilization for brief moments of time. I’ve been on the other side of the equation, and there’s nothing like hearing the buzz of noise that comes with an aid station. You want nothing more than to get there and get re-energized for the next step of the work in front of you. Aid stations can be a double edged sword, since the runners are so happy to see friends and enjoy some food, that getting them to leave can be tough. Many times we had to shoo the runners out of their chairs and get them back on the trail.

It’s a wonderful way to experience a race like this. There’s a satisfaction in helping those who are doing amazing things. It’s hard work for sure, but it’s fun and rewarding. Sometimes runners are crabby and demanding, but that is quickly forgiven as you try to simply help them meet their goals. There’s nothing like the feeling when a tired and beaten up runner comes into your aid station and their eyes light up when they see the soup that is ready and waiting for them. It’s a truly magical way to spend an evening in the woods.

Eventually though, it came to time to shut it down and pack up the truck. As we were packing I got word that the sweeps were still on their way with two runners ahead of them. One of the runners families was still waiting patiently as their loved one made their way through the woods. The truck was packed and leaving before we saw a headlamp cross the road and make it’s way down to where the aid station used to be. I briefly consoled the runner (they were well past cutoff and couldn’t continue) as I went looking for the final person on the trail. It was a friend of mine, and it turned out they didn’t have a crew or ride. So I drove them back up to their hotel before returning to my rental house.

In the evening my wife and her mom had arrived and so, once again after midnight, crashed into bed to try and get a few hours of sleep before the next day. I’ll leave that story for tomorrow’s post…

1°F (-17°C) shouldn’t feel like a heat wave, but it does! Amazing morning to be out there soaking it all up. #pathprojectskrew #pathprojects
How we’re spending Thursday evenings in February. Trampled By Turtles live from First Ave. Plus I got a TBT flask with my ticket package. What an awesome way to spend an evening. I hope some virtual concerts continue after the pandemic. For now I’m enjoying a wonderful evening with perfect music.
Patio season is open! Wonderful ride along the MRT to @forgottenstarbrewing on fresh powder. #surlyicecreamtruck #surlybikes #beerandbikesmn
Sunrise coffee with Minty. No better way to start the day than with a ride (or a run ;-) ) #surlyicecreamtruck #surlybikes
Two days; a run and a ride. So happy for the sunny weather and slightly warmer temp. #pathprojectskrew #surlyicecreamtruck #surlybikes
Twelve cold miles after not running all week. Body does not appreciate being thrown back into the fire like that. Got it done though and it’s always what I need even if I don’t know it at the time. #pathprojectskrew #trailrunning #polarvortex
Loading Comments...
Comment
×
%d bloggers like this: