This past weekend the wife and I were planning on doing a 24 hour race down in La Crosse, WI called Goosebumps. However, over the previous week massive rain and flooding called into question if the race would even happen. A couple of nights before the race we were reading the updates, and we made the decision to change our plans. The Goosebumps race still happened, and it appears they just missed the river cresting, but we still felt like we would rather do something different.

We located a different race that some other friends of ours were doing in Duluth called the Grand Traverse. It’s a super casual race from Jay Cooke State Park to Fitger’s Brewpub in Duluth. The entire race follows the Superior Hiking Trail, and there were four different distances you could pick from. The longest was 27.5 miles, followed by a slightly shorter 21 miler. A 16 mile and a 10 mile finished out the choices. Originally, I opted for the 27.5 full Grand Traverse, and my wife opted for the 21 mile.

The day previous to the race we did some hiking at Bean and Bear lake, and later that night I really started questioning if I should do the entire race. I reviewed my Strava data from the year and realized that I haven’t gone more than 20 miles since May. This fact alone was enough was reason enough to back down on the distance, but when combined with a knee that was feeling a bit ‘tweaky’ on Friday, I made a game-day decision to join my wife on the 21 mile course. 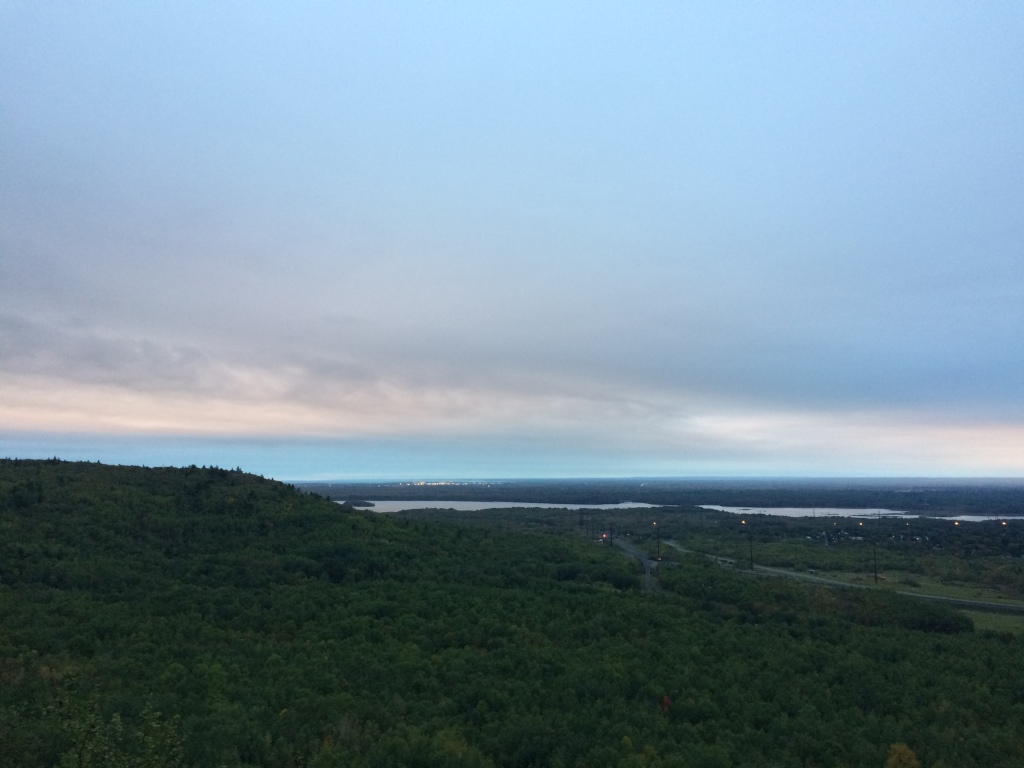 The morning of the race started very early at our campsite, rising before dawn. We arrived at Fitger’s to board the shuttle bus to the start. I informed the race officials of my desire to switch to the 21 mile distance, and since the 21 mile bus left at the same time it was no big deal. In fact, the 21 mile bus is the same bus that transports the 27.5 milers, but it simply makes a second stop after dropping them off.

We arrived at the 21 mile start as daylight was starting to take over the sky. There were less than 10 participants in the 21 mile as we started at Beck’s Road. The start of our journey was on the Willard Munger bike trail, but after a short bit of pavement we took a hard left and started our first big climb of the day up Ely’s Peak. My wife and I have had the benefit of hiking Ely’s Peak before, so we knew what to expect. Soon we were graced with an amazing view; a view that would quickly change as the day went on. 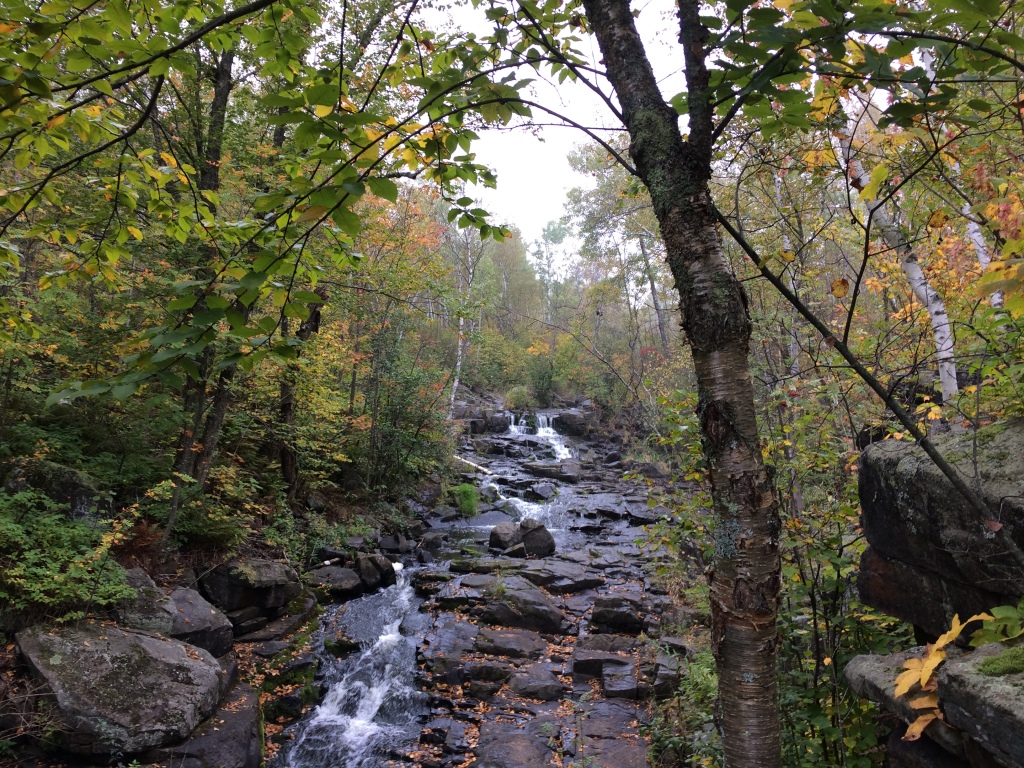 After hitting the first aid station at mile 4.2, I remarked to my wife that it seemed like it was earlier than I was expecting. As we entered the next section my phone suddenly rang. I checked the voicemail and it was a race official wondering why I hadn’t checked into the first aid station. I called them back and explained that I switched distances, but apparently that information never made it to them. They were calling to make sure that I wasn’t lost in the woods, which was very cool of them. Getting lost seemed to be a common thread throughout the day.

We continued on, and soon got to experience the incredible staircase up Spirit Mountain. I usually do just fine on stairs, preferring them to things like switchbacks. However, even I found this climb to be intense and difficult, beyond much of what I’ve done before. We crested the top and were greeted with the amazing Magney-Snively woods. This section of the course is amazing and beautiful, and some of the most scenic area of the SHT I’ve seen. We had ran some portions of the course, but for the most part we were treating this as a fast hike. Most of our splits were around 2o-22 minutes, which allowed us to keep moving, but still enjoy the beauty.

As I had mentioned it felt like the first aid station was a bit early, and so we started to wear down as we anticipated the second aid station. When it finally arrived it was a huge relief, and we partook in a ton of food to get us through the next half. Despite my socks being mostly dry I also opt’d to change them at this station to give myself something fresh to walk on. We spent 5-10 minutes at this station, but it was a well needed rest. At our current pace we were looking at over 7 hours to complete the entire course.

Because the entire race is unmarked, you must be very aware of your surroundings, and make sure you’re following the blue blazes of the SHT. There was another set of people who passed us twice, having taken a wrong turn before. We ran into them further on, and had to help them find their way back to the trail. Then when we were closer to the finish, another lady had lost the trail completely and we had to help get her steered back in the right direction. I also heard from our friends about how they had missed a turn and had to backtrack as well. For many of us who are used to wonderfully marked courses, this added a new challenge to this race.

The next section is when my wife hit her lowest points. We encountered more climbing, and when we would reach the tops of the hills, we were greeted by a thick cloud cover that enveloped us and shielded everything from view. It was beautiful and frustrating at the same time. You could hear the noises of the city below, but you couldn’t see anything. The air was wet and while not actually raining, we were getting damp. It took a lot of willpower to get through this section, and I had to remind my wife that soon it would all be downhill and we’d see the lift bridge. It was in this section that Robyn and Wendi both passed us. They looked amazing, and were moving really well. We agreed to meet for an early dinner at the end, before they each disappeared into the mist.

The final aid station eventually appeared, and we spent a bit of time getting refreshed and using a real portable toilet. I ate way too much string cheese, and cookies, for my own good before heading back on the trail. The final segment had us climbing to Enger Tower before descending to the city. My wife bemoaned the idea of one more climb, but I kept encouraging her that it wasn’t actually all that bad. At least I hoped it wasn’t, considering I had never been on this course myself.

Sure enough, the final climb to Enger wasn’t bad at all, especially considering all that we had experienced before. There is a giant bell on top of Enger and my wife rang it gleefully before we started our descent. When we reached the bottom of the hill the SHT turned to pavement as it made its way over to the Lakewalk in Canal Park. Once we were securely on pavement my wife cut me loose and I ran the final mile and a half into Fitger’s. I arrived in 7 hours and 35 minutes, with my wife arriving soon after.

We met up with Wendi, Robyn and a bunch of other folks and had an amazing, early, supper, before the closing ceremony. The final ceremony was a fun door prize drawing as well as a reading off of the names of everyone who completed the two longer distances. We relaxed and chatted with friends before going our separate ways for the night.

In many ways this race meant two different things for my wife and I. First, it showed me that despite having a really crappy summer of training, I still had enough of a base to move strong on a trail as complex and the Superior Hiking Trail. I opt’d to stay with my wife and avoid pushing myself, but I felt good throughout the race. That alone is a win in my book, as I still have a few more races this season. For my wife, it was solid confirmation that, despite being incredibly hard, she should have no problem with other races like Moose Mountain Marathon next year. This was her longest time on the SHT and it left a lasting impression.

The Grand Traverse is a fun race, and very low key, plus you get a beautiful commemorative rock! Needing to navigate yourself to the end, with so few participants around you, gave you a real feeling of adventure. Yet, you were right inside the city of Duluth for almost the entire race. Once we passed Spirit Mountain you could hear traffic, despite not being able to see it through the mist. It was amazing to experience such a wild trail, so close to an urban center. I could certainly see myself coming back to Grand Traverse again someday, as it was a fun and well put together race.