I own a 2011 era iMac, and for the most part it has served me very well for the past 5 years. However, technology has marched on, and over time my trusty iMac has gotten slower and slower. I considered simply getting a newer machine, but when I started comparing specs I realized that my CPU and memory wasn’t that far out of date. After reading some tips online, and talking with some friends, it seemed that perhaps my biggest bottleneck was my old spinning disk drive. It was time to upgrade to flash.

At first I wanted to keep it simple, so I bought a USB 3.0 external SSD drive, with a Thunderbolt adapter (my iMac is USB 2.0). I got everything hooked up, installed OS X on the drive, and discovered the external drive wouldn’t boot. Turns out that the adapter would not allow the drive to be recognized at boot. I could have purchased a native Thunderbolt drive, but I didn’t really care for the brands that were available in pure Thunderbolt. I sent all the equipment back and decided to take the plunge and replace my internal drive.

Today the new internal 500GB Samsung drive (with 2.5->3.5 adapter kit) arrived, along with the installation kit I purchased from Other World Computing. I was a bit concerned with cracking open my iMac, as they are not known for being the most hacker friendly. However, I quickly discovered that my fears were for naught.

To start, you simply use the enclosed suction cups to remove the glass plate that makes up the front of the iMac. Turns out it’s held on simply with magnets. Then you remove 8 screws that are holding in the screen, then tip the screen forward, and disconnect the four connectors from the motherboard.

Once you have the screen removed you simply unscrew the hard drive mounting screws, and disconnect the cable. It’s really just that simple. 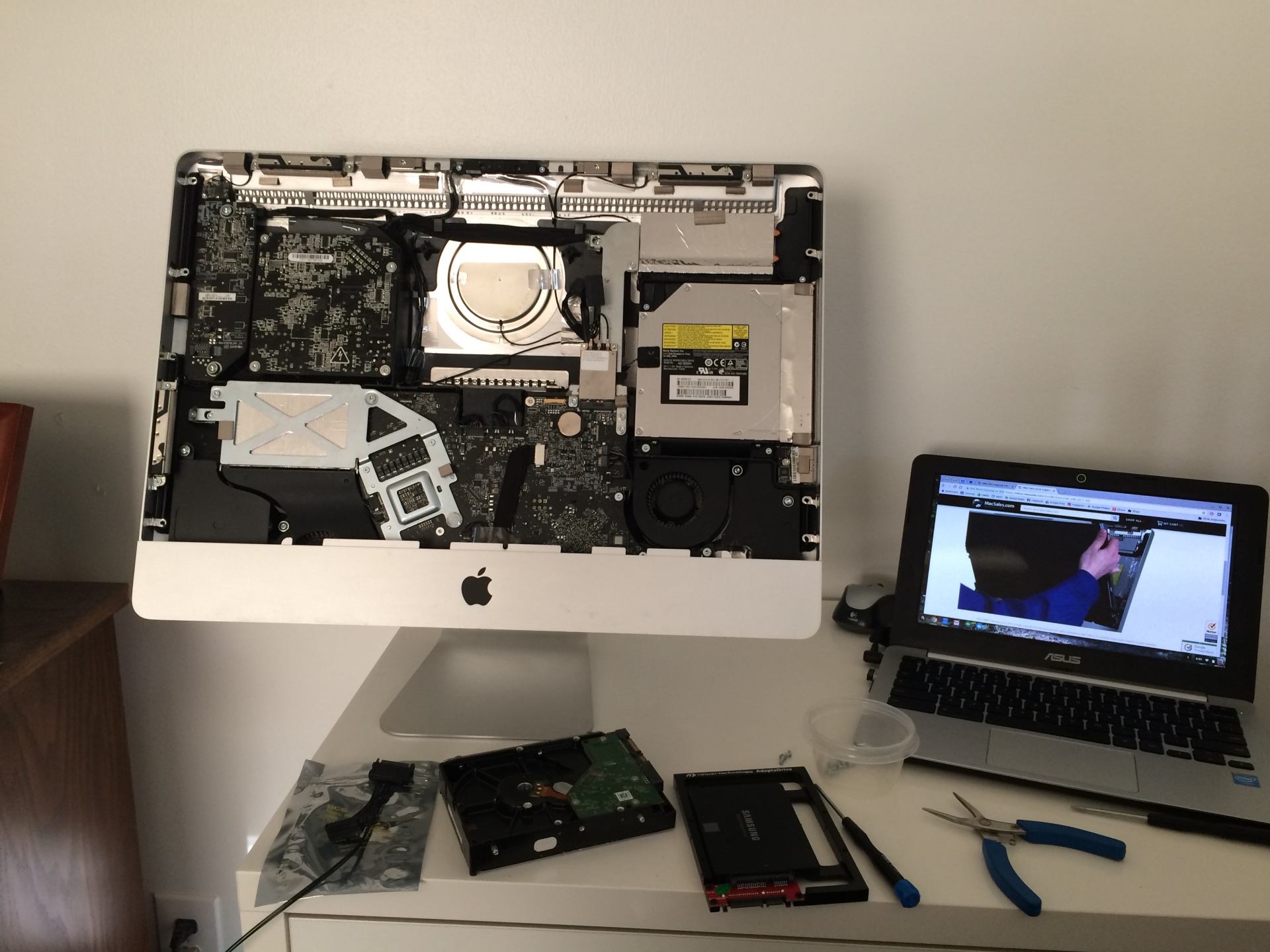 You then move the mounting brackets from the old hard drive to the new one, add the thermal bypass cable that comes with the upgrade kit, and put everything back together. I had the entire procedure complete in about 20 minutes.

My only word of advice is to have a small pair of pliers or tweezers around to help grab the screws from the screen as you undo them. The magnets that hold on the glass plate also wreak havoc when trying to remove or replace the screws around the edge. A pair of small pliers helped me keep the screws lined up properly.

I then began the multi-hour task of restoring my system from a Time Machine backup. It took about 3 hours, but when it was done, everything was exactly like I left it. Well, almost everything. Long wait times for applications to load, and grinding hard drive noises are a thing of the past, never to darken my door again. The speed improvement is stunning, and I simply can’t express in simple words how much of a difference it makes to my system at first blush. It’s like a whole new Mac for only a couple hundred dollars.

I’m can’t recommend enough how easy and simple of an upgrade this whole process is. Despite being so tightly engineered, my iMac was not nearly as scary as I thought it might be. Plus, there are dozens of great videos out there to walk you through the process. If you have a mid-2011 iMac I highly recommend this upgrade. You won’t regret it!

2 thoughts on “Upgrading the iMac with SSD”

First frost of the season. #winteriscoming
#pathprojectskrew runner not running. My @pathprojects gear works great mountain biking as well. It was a crisp morning and the Pyrenees hoodie was perfect. #pathprojects #mountainbiking #runnernotrunning #runnerbiking
Being introduced to the singletrack at Kiwanis park in Mankato! Super fun and flowy! Only had to a foot down once. Got some great practice on the skills park as well. #moutainbiking #surlyicecreamtruck #kiwanismountainbiketrail
Pictures can be deceiving. If this was the only shot you saw from my run this morning you’d think I was in a fantasy world. This was the 5 minutes of sunshine we got, the air was muggy, and everything is wet. But hey, for Instagram it was perfect.
First double digit run since Kettle 100K. Horse trails at Baker with the Marshview addon. Not as fast as I’d like but also didn’t want to push too hard. Trails were lovely, though Marshview had a lot of hills. Getting my fitness back. #pathprojectskrew #pathprojects #trailrunning #running #altrashoes
First run in a long time where I felt like my old run self. Super happy that I got up early and knocked out 4 miles. The humidity sucked though. Can’t wait for snow. #pathprojectskrew #pathprojects #running
Loading Comments...
%d bloggers like this: