The next big race on the schedule for me this year was the Spring Superior 50K. I ran the 25K version last year, and the Moose Mountain Marathon in the fall, so I was familiar with the entire course, and felt that I could tackle the full 50K this year. However, things didn’t end the way I had hoped.

I rode up to Lutsen with my friend Mike, since my wife wasn’t going to be able to join me until Saturday. Maybe it was the fact that my ‘big’ run of the year was already done with the Zumbro 50 mile, or perhaps the fact that my training hadn’t been what I wanted it to be, with only 94 miles logged in total since Zumbro, but my mental state wasn’t where it should have been. I just wasn’t feeling mentally ready for this race, and was doubtful of my physical readiness as well.

We arrived on Friday night, and simply being around all the rest of the running crowd that I know and love started to shift my mood. Mike and I did our packet pickup, and explored the trail a short bit so I could take some photos. We listened to the pre-race briefing, and my entire attitude started to shift. It wasn’t enough to completely change my mind, but I started feeling my runners excitement kick in. I spent the night vacillating between feelings of excitement and readiness, to feelings of wanting to just go home.

Yet, when race morning arrived the act of getting dressed and getting to the start line made me remember why I love this crazy sport so much. We did our morning check-in and then hung out on the patio for a bit, saying hello to all of our friends who would be joining us out on the trail. Seeing everyone who was either running or volunteering made me happy, and made me want to be no where else in the world that day, except right here.

Because the weather was predicted to be rather warm, I dressed in shorts and a t-shirt, and decided to use my water bladder so that I would have plenty of water for the day. We launched promptly at 7am and I broke into a faster than normal run in an attempt to beat the ‘conga line’ that usually forms when the trail narrows. More importantly, my body was feeling great. Nothing was hurting, like in the past couple weeks, and I felt like I was moving pretty well. It also helped that the trails were bone dry this year, nothing at all like the mud-fest from last year.

We dropped into the trail and before I knew it I was already on top of Mystery Mountain. My pace was solid, but not faster than I should have been, and the miles seemed to click off like nothing. I hit the Oberg aid station in a faster time than I’ve ever done, and felt great doing it. I was feeling good, and my only issue was my left Achilles tendon, that took a hard hit somewhere between Mystery and Moose. The ache wasn’t too bad so I plowed on.

My pace dropped a bit between Oberg and Sawbill, which I expected, but I was still feeling good. However, it was on this section that I started to fight my biggest enemy of the day, the heat. By the time I pulled into Sawbill (with my best section time ever), I had moved on to soaking my buff in water to try and keep my head cool. I was also dumping water down my shirt to try and keep things from overheating. I headed out for the short climb up Carlton Peak with a bit less of a spring in my step but still doing mostly OK.

The climb to Carlton is tough, an uphill slog that turns into a bit of rock climbing. By this point there was a lot of two-way traffic with people coming down the mountain, but it was fun to encourage everyone who was ahead of me. I ran into Mike again as he was descending, about 20 minutes ahead of me. I made the final ascent to the top of the peak and took the requisite selfie with the lake in the background. Kevin Langton was there in a fake wig cheering everyone on and being the amazing Keven that he is. I knew I couldn’t dawdle long, so I turned around and started back down. 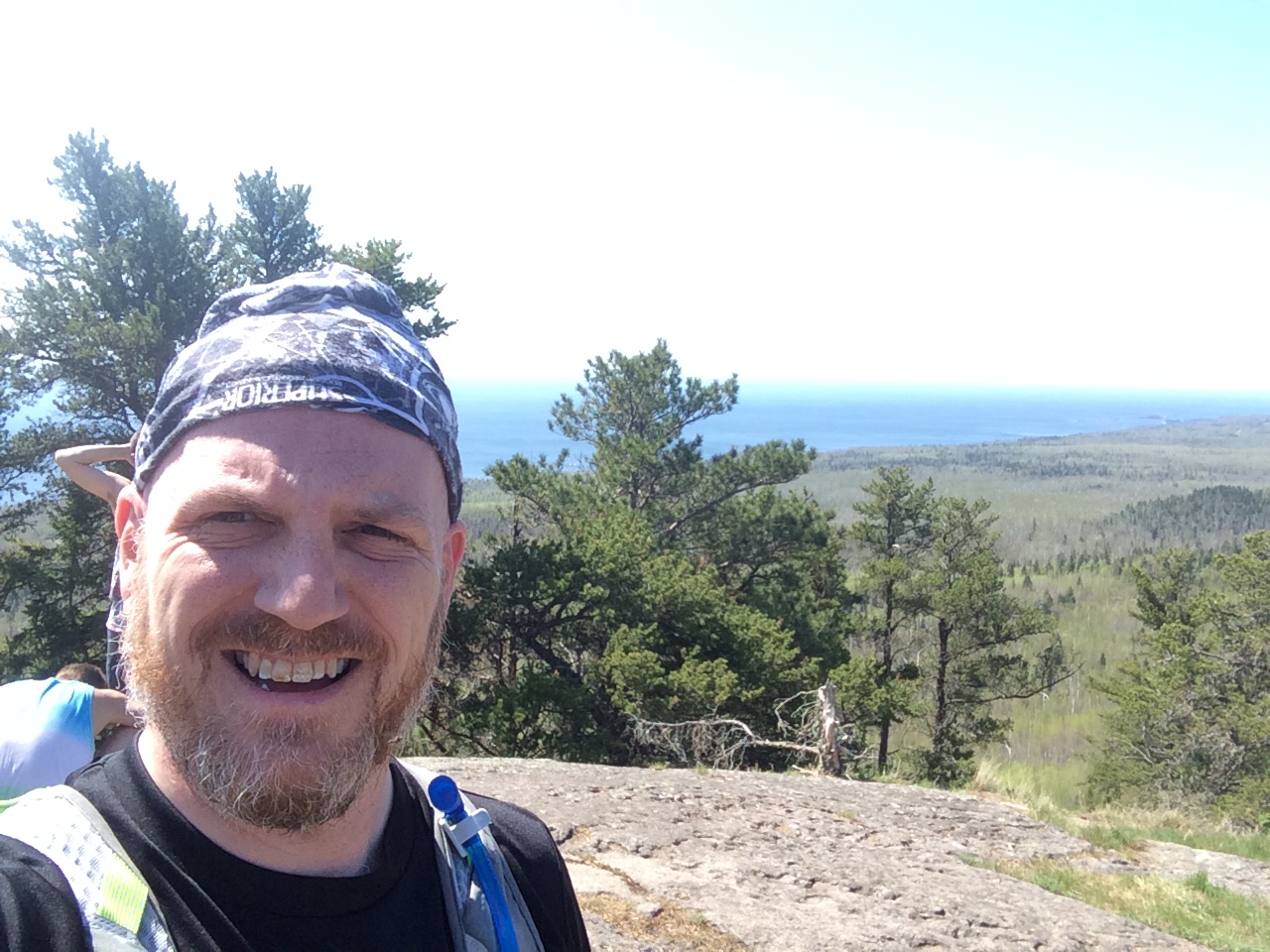 Even though I was on a downhill almost the entire time, I wasn’t getting as much speed as I wanted. Partly this was due to the very, very rocky terrain, as my Achilles and lower back were feeling pretty beat up at this point. But even when I got to the runnable boardwalk I was having trouble keeping my body heat under control. I got back to Sawbill a solid hour ahead of cutoff, did what I could to cool down, and started moving as best as I could again.

The final section between Sawbill and Oberg was where it all fell apart. I tried some light running for .5 to .75 mile stretches, but it just wasn’t working. Every time I ran my heart rate spiked, and I started to feel some of the initial effects of heat exhaustion. By two miles in, I was feeling nauseous, and my balance was starting to suffer. At this point pretty much everyone was passing me, and I knew I was probably done for. The final 2 miles to the aid station were a slog, clicking off 26 and 24 minute miles. As I looked at my watch I realized I had used up almost every last minute of my buffer, and would be arriving mere minutes before cut-off.

Because I know how horrible heat exhaustion can be, I decided that I didn’t want to endure that while climbing back up Moose and Mystery mountain again. As I approached the Oberg aid station I unpinned my bib, and decided it was time to take my first DNF ever. My friend Mark gave me a couple quick words of encouragement, telling me that I could still continue on, but even he admitted that he saw I had ‘the look’ and was done. According to my GPS I ran 21 miles, but the official course distance was 23.25 miles. Either way, it was all I was getting done for the day.

I plopped down in the chair at the aid station under a canopy, and started running through the whole day in my head, while trying to cool down. When I reached the turnaround point at Carlton Peak I was still on track for an 8-8.5 hour finish. Everything fell apart in that last segment from Sawbill to Oberg, and its astounding to see how quickly a run can turn south. I finally got cooled down, and myself and three other people who either dropped or missed cut-off, took a car back up to Lutsen to rejoin our families.

I found my wife and let her know what went on, and then headed back to the room to shower off. After getting cleaned up we headed back to the patio to hang out with friends and toss back a few beers. Everyone was talking about the heat this year, as it took a toll on lots of people. A couple people were talking about how they were vomiting up Moose and Mystery Mountain, which again cemented my decision to drop in my mind. The last thing I needed to do was pass out while trying to climb up such huge obstacles.

We hung out on the patio for a while, and saw the rest of our friends cross, exhausted and tired with times far slower than they had ever done before because of the heat. After a while it was time to go back to the room and get some rest before dinner. I fell into bed last night still thinking about the race. There was that little part of me that brought up thoughts that I should have just continued on, that I could have gotten it done. It’s easy to think things like that when you’re lying in a soft bed in an air conditioned room. I knew I made the right choice, no matter what that little part of my brain was telling me.

I started trail racing in 2015, and I’ve slowly been moving up the levels into these harder ultra distances. It was only a matter of time before one of them got the better of me. The Superior Hiking Trail is some of the roughest terrain out there to run on, so it’s no surprise that when combined with a really hot day, things didn’t turn out in my favor. My sights now turn to a couple half-marathons and a 25K in the next few weeks. Hopefully, I’ll be able to get in some training in warm weather to get myself better acclimated to heat.

Although the weekend didn’t turn out quite as planned, I can think of no place I would have rather had this experience. Superior is a special place, and when you’re surrounded by great people it makes everything all right. Most of my friends have already joined the DNF club at some point in their running career, and to have them supporting and encouraging me is what makes this community so damn special. I’m truly grateful to know so many awesome trail runners.

I’ll be back Spring Superior, we have some unfinished business…

I spent the last week volunteering at Arrowhead 135, but was excited to get back to the regular routine at the Creek. When I’m volunteering for days my sleeping and eating takes a big hit. I felt it on the 9 mile run today as Beth and Mike were feeling much better, and graciously pulling me along. In the end it was a solid run and I survived just fine.
Erik Raivo as our DFL at Arrowhead 2023 #arrowhead135 #winterultra
I got a chance to head out and shoot photos of the participants roughly 3-4 miles into the race. Missed the lead bikers, but should have almost everyone else in here. #arrowheadultra135 #winterultra #racephotography
Properly cold January run this morning. #trailrunning #icebeard
Finally spending a normal weekend at home and getting in a solid run at Elm Creek with the gang. Good to be in maintenance mode right now before training kicks in later in February.
Race report is live on the blog (link in bio)! This one's a bit long, but it was a long adventure!
Loading Comments...
%d bloggers like this: