Somewhere in our crazy mind, the UMTR Board decided that doing a virtual fatass would be a great idea, and to make it even crazier, we added a twist. The loop you run (or out-n-back) has to be less that 0.5 miles long. So this morning I headed over to the pond two blocks away, and started my loops.

This pond is 0.4 miles long, so it’s the perfect distance for this event. It also has a gravel path around it, which makes it a little bit more like trail running. I haven’t been running a lot lately, so I didn’t have any serious goals, but know I could probably knock out 10 loops pretty easily (4 miles).

It was a bit chilly when I started out, with temps in the high 20’s. I overdressed, as usual in the Spring, but thankfully had lots of pockets to stuff gloves and hats in. The sun had just come up with I started my loops, and there was no one else around. In fact, during the entire run I never saw another person. Just a couple of dogs in the fenced in yards next to the path. It was just like it was supposed to be. Quiet and alone.

Around loop 7 I decided I was feeling good enough for a 10K and started the math in my head. With a 0.4 mile loop, every 5 loops is 2 miles. So I needed 15.5 loops to make it 6.2 miles. What’s cool about this park is that there are a couple of different entrances and there is another path into the park at the half-way point that dumps me out about 30 feet from the street I live on.

Once I hit 10 loops the temps started really warming up. In fact it started to melt a small frozen section of the path, resulting in a small water/mud hazard! I couldn’t believe how trail like this little run was becoming. I might actually get a few specks of dirt on me! Being this was my longest run since early March, I was starting to feel the miles pile up. The last couple of loops were a bit of a slog mentally, but my body seemed to be doing just fine. I was incredibly consistent over this entire run with each mile landing between 10:35-10:49/mile. I am phenomenally pleased with that. 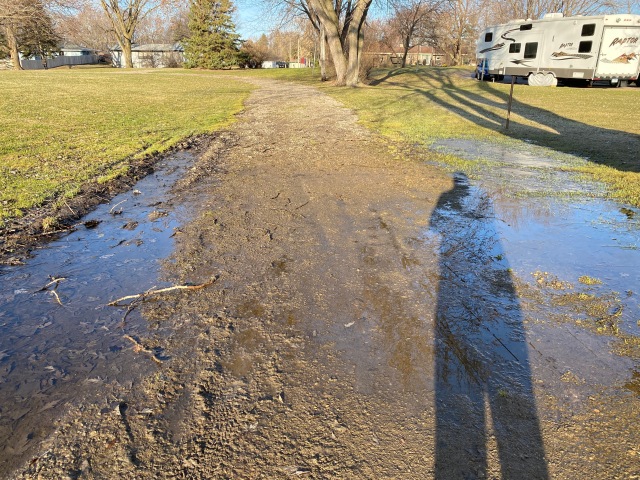 Finally the watch beeped 6 miles and I started the final half-loop to the east entrance to the park. I hit stop of my watch and it was almost 10K on the nose. Really shocked at how well that worked out. I did a slow jog back down the street to my house and spent a few minutes just hanging out in my driveway to cool down. It was super fun to do something silly and crazy, and in solidarity with all of my other trail running folks. I can’t wait to see all the entries this week as we tally the results. It’s amazing what a community can do with each other, even when we can’t be in the same place.