Our quest to learn and experience more about the winter ultra scene brought my wife and I to far northern Minnesota this week to volunteer at the amazing Arrowhead 135 race. As with many winter ultras, this is a multi-modal, survival-focused, event. Participants have the option to use a bike, skis, or their feet, to complete 135 miles along the Arrowhead trail. The portion of the trail that the racers follow is from International Falls, and travels to Tower, MN. 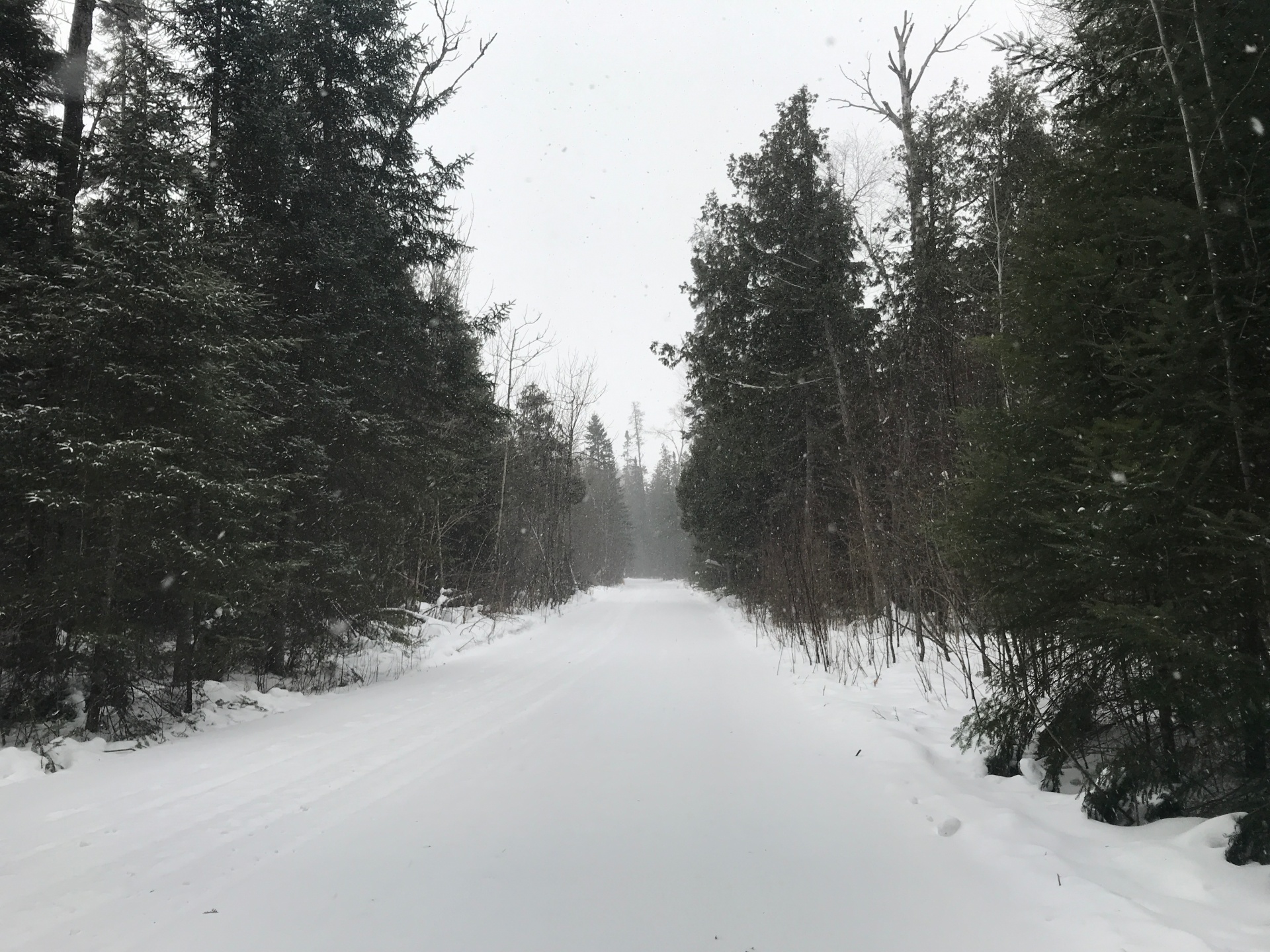 Additionally, racers must carry enough equipment to survive on their own. That means loading up tons of bags on a bike, or pulling a sled if you’re on foot. You have to have enough equipment to be able to survive out on the trail until help can get to you. That’s why these races have strict entrance requirements, with mandatory gear that is checked both before and after the race. We had already spent time at the Tuscobia race, and were excited to see another winter ultra in action.

We arrived in International Falls on Sunday, and since we had a little bit of extra time, we headed over to Voyageur’s National Park. This is the only National Park in Minnesota (though I think we should fight Michigan for Isle Royale), and so we wanted to take advantage of this opportunity to at least pay a short visit. We stopped by the visitor center and got our swag, and then went outside to look out over Rainy Lake at Canada. 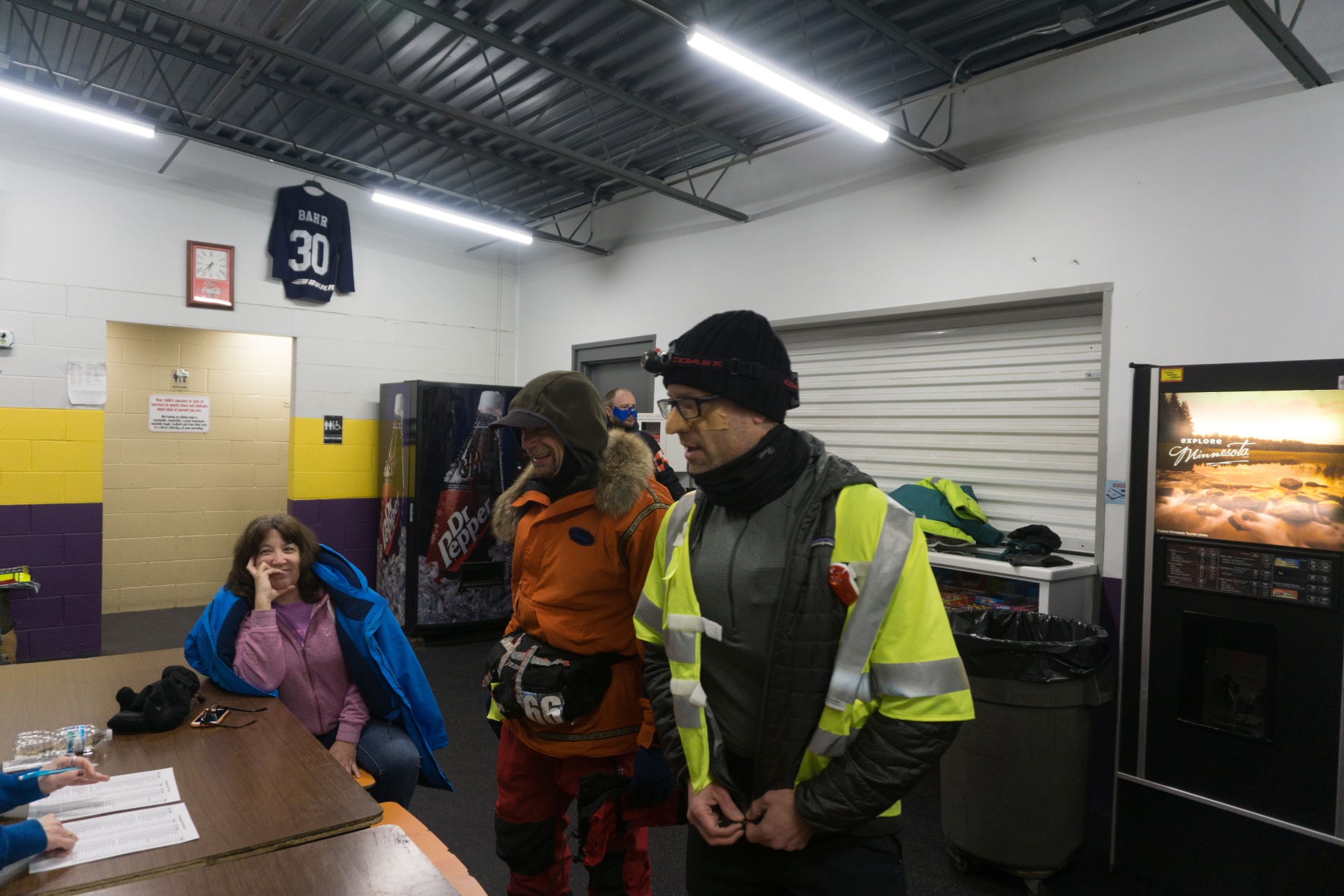 After a short visit we made our way back to the community center to attend the volunteer meeting, and soak in the atmosphere of the pre-race participant meeting and pasta supper. One of the things we love about these events is the ability to connect with people all over again. A large portion of the evening was spent catching up with people we hadn’t seen since Tuscobia, or longer.

We also got to see two of our friends, Kari and Kate, come in from their double Arrowhead adventure. They had started on Thursday, at the finish line, and then proceeded to hike the course backwards, all in time to be there for the Sunday night meeting, and then turn around and run the race back down to the finish. They are the first women in history to complete a double Arrowhead, and everyone there was in awe of their guts to try and do something like this. Eventually, it was time to head to the hotel and get checked-in. We took advantage of some free time to his a brewery in Ranier, just down the road. I got to have some nice beers, and a couple other folks from the race were there as well to talk with. Soon though it was time to get some sleep for the long few days ahead of us.

The alarm went off early, and we made our way to the start line. All of the racers were twittering with nervous energy, ready to start their adventure. Adrenaline had taken over many of them, and they wanted nothing more than to just get out on the trail. For one runner though, other issues had suddenly appeared. Our friend Scott from Winnipeg had gotten his car stuck outside the parking lot area. He wasn’t sure what to do, so we happily told him to just give us his keys and we’d take care of it. At 7am the fireworks went off and the bikers headed down the trail, followed shortly by the skiers, and finally the people on foot. The quiet crisp air was suddenly alive with the sound of tires, skis, and sleds moving across firmly packed snow. Within moments the blinking lights that are required to be attached to every participant, faded into the distance, and we began the rest of our day. The first task of which was to get our friend’s car un-stuck. I won’t go into too many details, but it involved a tractor, which got stuck, and a truck that had to pull out the tractor, before we finally had his car safely in the parking lot. It was quite the adventure to start the day with, but we were more than happy to do whatever it took to make sure he was able to get on with this race he’s been training for.

We headed back to the hotel, and then proceeded to make our way to the finish line in Tower, MN, at the Fortune Bay Casino and Resort. We arrived safely, got checked in and then helped set up some of the finish area before trying to get some sleep before our first shift at the finish line started at midnight. Neither of us have worked an overnight job in many, many years, so it was certainly interesting trying to make it all the way to 6am, but we got through it. Frankly, it went really fast until about 5am, when everything seemed to slow down and take forever. 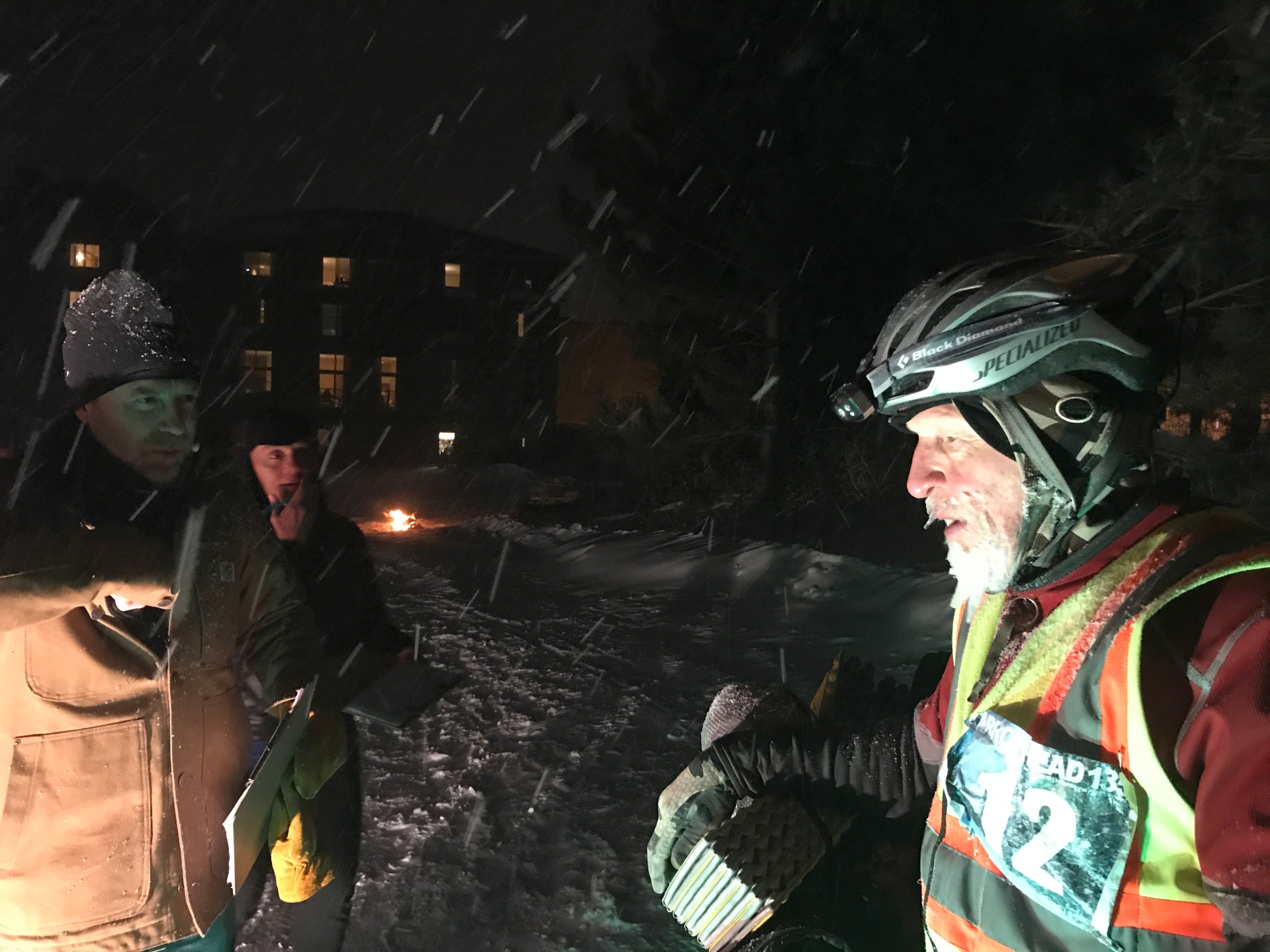 However, it was a ton of fun taking care of all the bikers who were coming in during the early morning hours. The temps were hovering around -25F, and they were all grateful to be done, and that we were there to help them. For every racer that came in we had to get their gear stowed, and do a quick gear check to make sure they had everything they were supposed to. Then we got to bring them upstairs to the hospitality area and get them checked in with the folks working there. They got their award and some nice hot food, and a chance to rest and recuperate a bit before trying to get some serious sleep.

Once our shift was over we also tried to get some sleep. I managed a solid 4 hours, and then went outside to see how things were going. More bikers were coming in, and we were tracking the progress of all the people on foot. I helped for a little bit and then headed inside to get myself ready for a short run.

I headed out on the trail for a 5 mile jaunt, and when I left I realized I had overdressed. I felt great so I took off my jacket and tied it around my waist. I was surrounded by tall pine trees, and the trail was nice and hard-packed. When I reached the 2.5 mile mark I had moved into a young growth forest, so there wasn’t as much protection from the wind. I didn’t think much of it until I turned around and realized that for the past 2.5 miles I had a SOLID tailwind. When I turned I was blasted in the face by a massive amount of blowing snow and blustery wind. I pulled my jacket off my waist and proceeded to get it on. However, the wind was so strong that it was blowing like a flag, and it took me 3-4 minutes to get my other arm into the sleeve. Needless to say, the run back was much slower and colder. 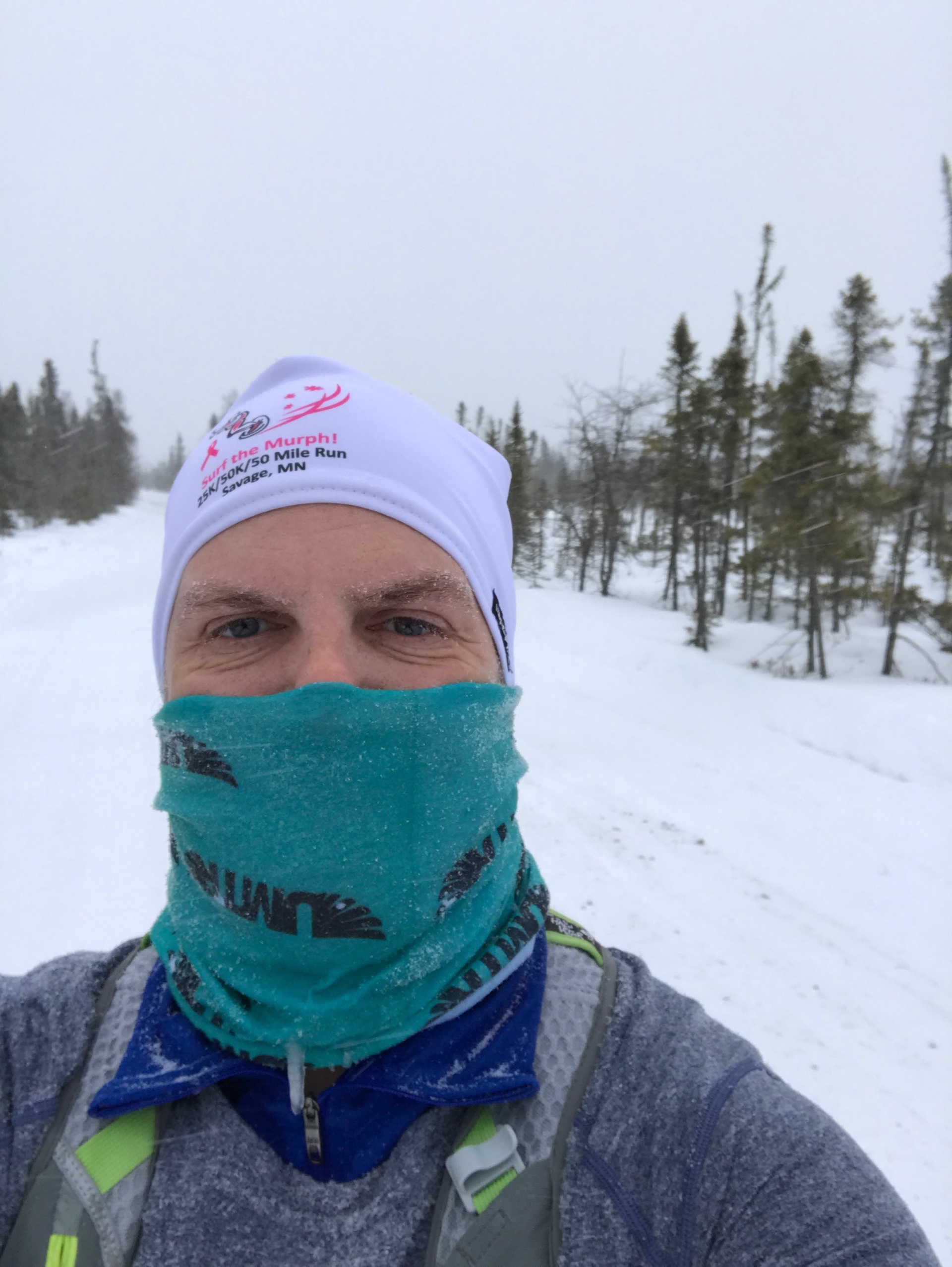 Our next shift was the 6pm to midnight shift, so I wanted to get in one more nap before we headed back out. We arrived a little before 6 and continued to help with a steady stream of bikers. The first skier had already arrived before we got there, but the lead runner was still a little further away. Our friend John Storkamp had left the last checkpoint with a 45 minute deficit behind the lead runner. However, knowing John I knew that this was going to be one battle he wouldn’t give up easily.

At one point we were suddenly inundated with 4 bikers who arrived one right after another. Myself and another volunteer got them all settled and up to the room, and as I returned outside I come to find that John had just finished. He crushed the final segment of the course and came barreling in so fast that the other volunteers first thought he was another biker. Myself and two other volunteers watched as we did a full gear check to make sure he had everything, and then he was brought upstairs to celebrate. It was an amazing accomplishment to witness for his 10th Arrowhead completion.

Returning outside we also got to help the second place runner, as well as the first unsupported runner. Racers can elect to do the race completely unsupported, which means they can’t even take water or warmth from the checkpoints. They have to go completely on their own. Parker Rios was that first unsupported runner and he did an amazing job. He came in right after midnight, so my wife and I brought him up together before ending our shift. He was hurting, but in good spirits and was an amazing inspiration to everyone.

Due to work commitments we couldn’t stay long on Wednesday, and so after getting some rest we went and hung out for a bit with folks before packing up and heading home. We were both a bit bummed that we had to leave so early because we missed out on seeing so many of our running friends. One of the things we want to change for next year is to make sure we can be there till it’s all done. 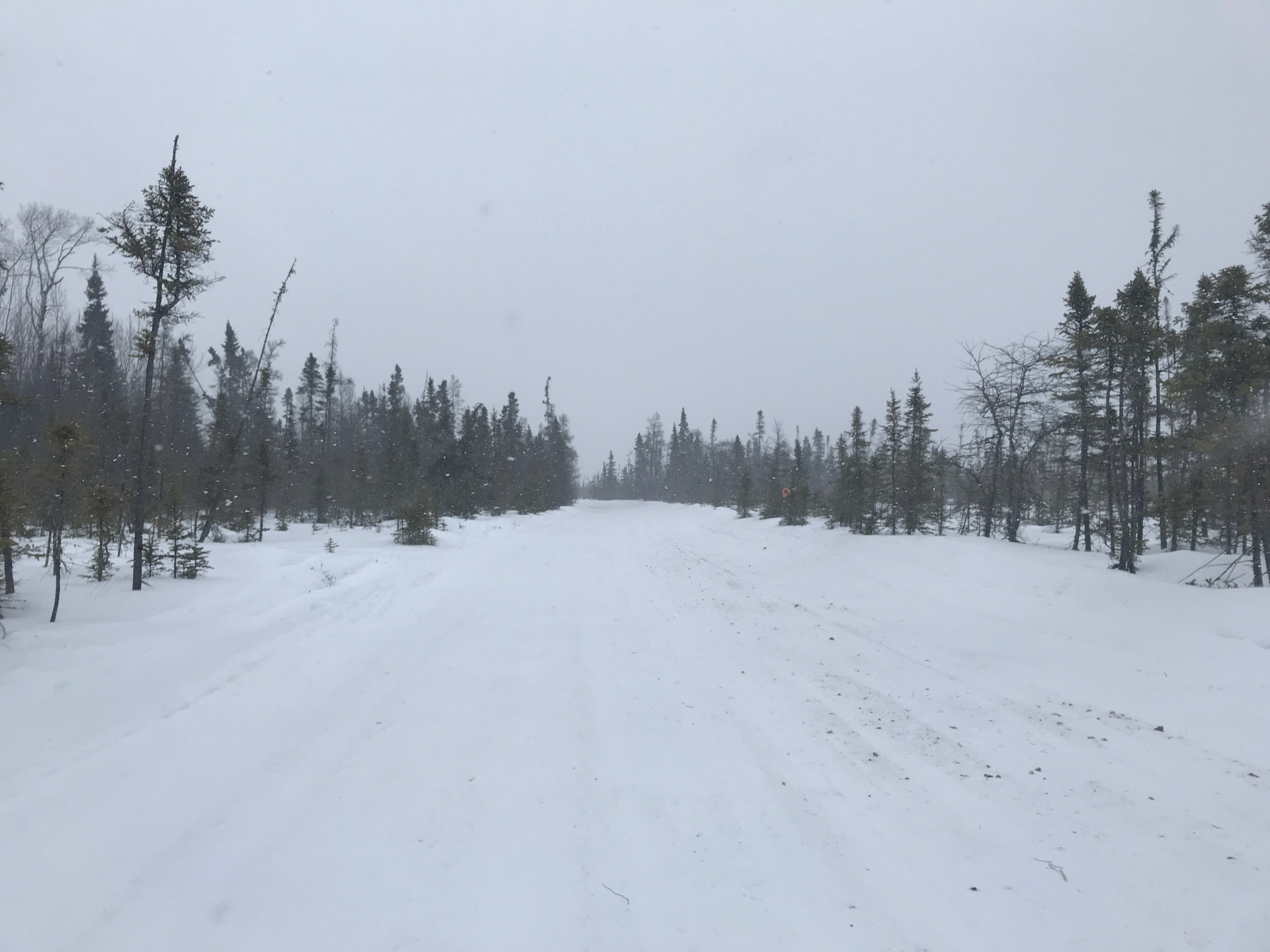 Watching these competitors complete Arrowhead, like Tuscobia before it, is so incredibly inspirational. The sheer determination and grit that was on display this week makes you feel like you can accomplish anything. These are ordinary folks who choose to put themselves through horrendous conditions to achieve amazing things. They test their limits and learn what they’re made of. Even people who drop early are powerful examples of what you can do when you put your mind to it. Just being willing to toe that start line, in the cold Minnesota wind, and see if you have what it takes, is amazing.

Arrowhead 135 was an amazing event to be a part of, and I can’t want to go back in future years. It’s a wonderful community, and I feel honored to be able to play some small role in it. When you’re surrounded by such incredible forces of nature, you can’t help but be inspired to do whatever you can to overcome the challenges you have before you, and conquer them. 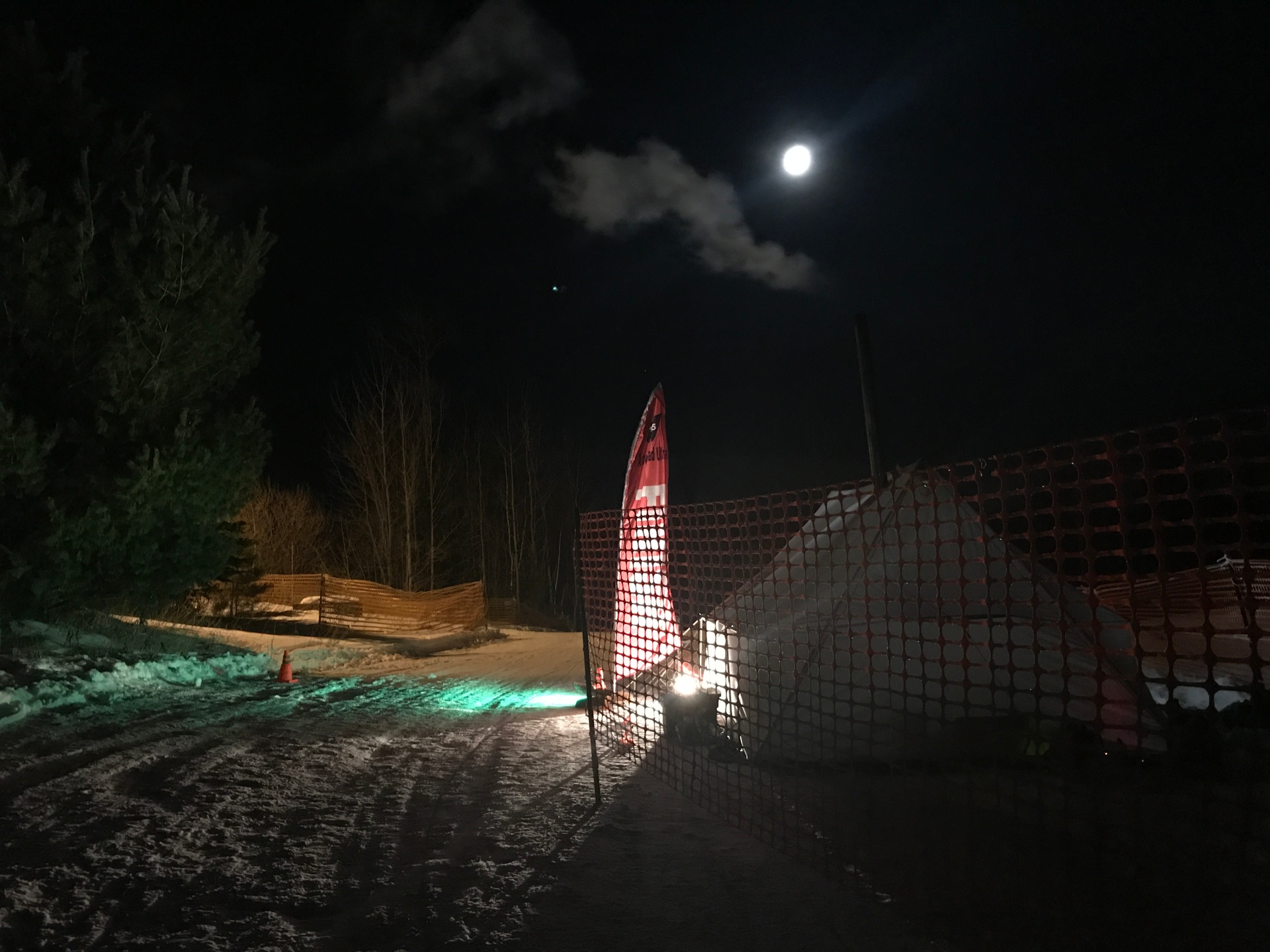 One thought on “Arrowhead 135 volunteering”