Last week the wife and I had the opportunity to check out this new place in the Twin Cities called Can Can Wonderland. It’s part mini-golf/arcade, and part bar/music lounge. It’s put together by artists and is built in this old canning factory. 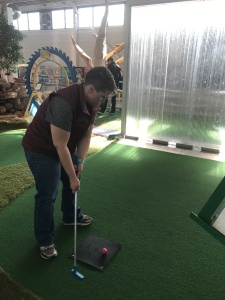 The adventure begins when you find the “secret entrance” at street level and make your way down tunnels and stairs. You feel like you’re descending into the bowels of some dingy basement, but when you enter Can Can’s space you’re greeted with beautiful natural light from large windows near the roof. When the afternoon sun comes in you almost feel like you’re outside because of the abundance of natural light.

We bought our mini-golf tickets and started our round. All of the holes were uniquely designed by artists, each with it’s own theme and message. The holes were also very fun to play, with a bit of challenge to them. One of them that was easier on a game level was also one of the most visually stunning. As the picture below depicts, it looks like I’m about to drop my golf ball into an abyss, however it’s completely an optical illusion and the entire space is just Plexiglas over an image.

I also really enjoyed the steel drum hole which was made with containers similar to the ones that would have been used in this former factory. Hitting the balls off of them made really beautiful sounds that echoed throughout the building. The final hole was hilarious, entitled the World’s Longest Hole. It spanned the entire length of the course, hundreds of feet, but in a completely straight line. Can Can Wonderland has promised a year’s supply of beer to anyone who can make a hole-in-one on it. Needless to say I think that’s near impossible, as neither of us could even get our balls more than 2/3-3/4 of the way down. 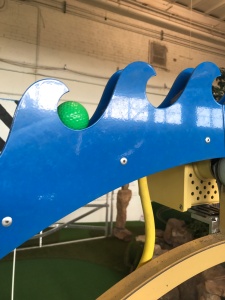 Once we finished our game we had some grilled cheese at the bar and considered waiting around for a polka band to start playing. However, we were both tired from the week and decided to simply head upstairs to a new taproom that had opened up for a quick drink before heading home.

My biggest recommendation for Can Can Wonderland is to get there early. It got very crowded after we arrived, and if you have younger kids you’ll want to not be fighting a mass of people at the same time. Otherwise, I highly recommend taking a visit to Can Can Wonderland. It’s a lot of fun, and it’s visually very unique. A lot of artists put their love into what you see and it makes everything feel amazing and special.