We started our second day of the trip with a wonderful visit to the National Eagle Center in Wabasha, MN. We got to see some beautiful eagles up close, as well as some eagles out over the river. One of the coolest parts for me was when we spotted a tree out on an island in the river with four bald eagles perched in it, just chilling out. We have tons of eagles up in the metro area, but getting to see so many of them in one place was a lot of fun.

We also got to see a special presentation by the Cincinnati Zoo where they showed off a bunch of different birds from around the world, including macaws and owls. It was fun to have a bunch of colorful birds buzz the audience as they talked about their habitats. They made sure to highlight a simple way to help birds in South America, recycling aluminum cans. Apparently, some of the biggest deposits of bauxite are in areas where many of these birds live, and by recycling we can limit the amount of new bauxite that we need to take out of the ground. My only regret of the morning was forgetting my good camera at home.

Once the bird show was done we grabbed some lunch at a nice Mexican restaurant in town and headed back to Winona to try a couple new breweries. The first on our list is the brand new Island City Brewing Company. This brewery opened a week ago, which always causes me to expect the worst. Many breweries have a hard time moving into production, and as a prime example, the brewery I visited on Wednesday had been open 4 months and was pretty terrible. However, Island City showed that it’s very possible to nail an opening.

They don’t do flights, but they offer short pours that looked around 6oz. I got two of their regular beers, a red and a berliner weisse, as well as their special red with an infusion of juniper, orange, and mint. The red intrigued me because it was a 3.5% ABV beer, and I’m always on the lookout for nice session beers. However, trying to impart good malt body into a beer so light is difficult. I’m pleased to report that Island City nailed it with this one. It had a great malt body, yet was refreshing and flavorful, like a red should be. The infusion version was a completely different taste than I have ever had, and reminded me of a nice herbal tea. It was something different and I was happy I tried it. 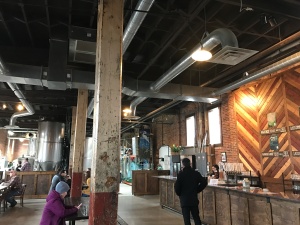 The final beer of my sampling was their berliner weisse, and it was a wonderful example of how a sour beer should taste. It was a great ‘sour patch’ tart beer, which isn’t always everyone’s cup of tea, but I enjoyed the balance. Overall, Island City is doing things right. They have a fun warehouse space in a very, very old building right on the river, and their opening lineup is very solid. If I had one complaint it is that they don’t do a proper flight (they only have four beers on tap not counting the infusion), and that they don’t do small growlers. I have a hard time going through 64oz of beer on my own at home before it gets so flat that it’s just not tasty anymore. Apart from these minor quibbles I was really pleased with what Island City offered. It was well worth the trip.

Our second stop of the day was Wenonah Brewing, which was just north of Winona in Goodview, MN. For as quaint and professional as Island City was, Wenonah was on the opposite side of the spectrum. The building looked like a former gas station, and the inside remodel job looked pretty rough. It was mostly comfortable though, and the staff was very, very friendly. Wenonah does flight sized samples, so I ordered up a set of 5, one of each of their beers.

As I worked through their beers my overall impression was mediocre. The nut brown ale was way too dark, and the IPA was a complete failure. I’m really tired of places that try to use earthy hops to make an IPA, as it usually just doesn’t work. The beer ends up being overly dank, to the point of tasting like dirt. The only real winner out of the flight was the Honey Cream Ale which was well balanced and drinkable. As I was talking with the staff they pointed out their brewing setup, which was basically just a very large homebrew setup with a bit of extra pumps and plumbing. Everything they do is small batch, and so I assume they change out their flavors quite often.

The contrast from Island City was very apparent. Until a week ago Wenonah was the only game in town. If someone wanted to experience a brewery taproom, they were it. Now that they’ve got some competition I feel like they need to step up their game a bit more. I foresee them becoming the more ‘counter-cultural’ place to hang out vs. the established Island City. Thankfully, the beer culture, even in outstate Minnesota, is expanding to allow for different perspectives in beer. I think if Wenonah can up their quality game just a little bit, and focus on being that place with unique, ever changing flavors, they can establish their niche. Much like how places like Dangerous Man work in the metro area.

Once we finished up, we headed back to the hotel for a nice relaxing afternoon and evening before dinner. So far it’s been a really nice relaxing trip. Tomorrow is some early morning running and then a stop at Red Wing Brewery for lunch on the way home. Another great weekend away with the wife, sharing in an adventure.