Ever since I changed my running philosophy this year, I’ve been much happier with where I’m at. I’m not stressed about “the next big race” because I don’t actually have any races planned. I’m just doing things when I feel like it. Case in point, the Treasured Haven Farms 12 Hour Run that I did on Sunday. My wife had signed up for this run a long time ago, so I knew I would be there, but I didn’t decide to join in until 9 days before the race. It was another moment where I said, “what the heck, that sounds fun.”

Treasured Haven Farms is one of the hidden gems of the trail race world here in Minnesota. It’s a small organic farm that opens up their property to trail races a few times throughout the year. We’ve done a 7 mile race there before and it’s a lot of fun. This is old-school trail racing at it’s finest. No chip timing, no big fanfare, just a bunch of land with trails on it, and a clock at the finish line.

When we arrived we were greeted by a few other UMTR friends who had also made the trek. They had opted to do the 3 and 6 hour version of the race, which was probably smart given the predicted high temps for the day. This was going to be one of the hottest days of the year with temps reaching into the 90s. We also found out that besides my wife and I, only one other person had signed up for the 12 hour race. This factor would be key later in the story. 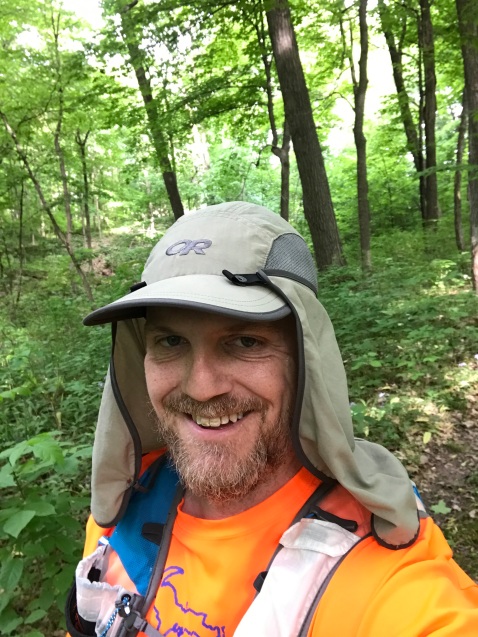 At 7 am the race launched and I started out at a decent pace figuring I should, carefully, bank some miles while the air was still cool. I locked in to an 11:30 pace, which under most, flat, circumstances is my “go all day” pace. The loop that we were running was 3 miles long around the edge of the farm fields, with a couple jaunts on to some beautiful wooded paths. These wooded areas became sanctuaries throughout the morning as the temps started to climb and the sun started beating down hard.

The first couple of hours melted away pretty quickly for me. Just over two hours in I had a solid 10 miles on my legs and was feeling pretty good. After three hours I decided it was time to move to a run/walk strategy to help conserve energy and survive the climbing temps. By this point the 3 hour runners were finished up, however our amazing friend Ann, and another friend’s husband DuWayne (she was running the 6 hour) decided to be our crew for a while.

Every time we came in from a loop they were right there making sure we had everything we needed, throwing away our trash, and generally taking care of our every need. They stuck around for a lot longer than they needed to and treated us amazingly. We were humbled and grateful for how wonderful they were to us. Another friend of ours, Bob, showed up with trail running fixture, Pearl the dog. He lives near the farm and so he stopped by a couple times to encourage us. That was a huge surprise and really lifted our spirits as the day wore on.

As the race continued I caught up to my wife who was a loop behind me. We would occasionally stick together but usually one of us would move ahead of the other as we were feeling good. As the loops wore on I ended up spending a lot more time at the main aid station, taking my time as I felt like it. I went in to this race with very minor goals, and so I wasn’t pushing too hard to do anything phenomenal. A few days before the race I thought it would be amazing if I could get 100K or 50 miles, however as the weather report got hotter and hotter, I decided that if I could bang out a 50K I would count that as a success. By 5 hours in I was already at 20 miles, so I knew a 50K was pretty much in the bag.

As the 6 hour run was finishing up a huge blessing rolled in, in the shape of clouds and a light rain.  Suddenly everything started to feel right in the universe again. There was a breeze with the clouds and the temps dropped in to the 70s. It was a little bit of heaven. Granted I had still been running for 6 hours and was feeling all that pain on my legs. I had a major blister on my right big toe that I got covered up, but it still was an irritant. As the hours wore on it also became apparent how lonely the rest of this day was going to be. After the 6 hours folks finished up, the only people left were myself, my wife Lisa, and another runner named Eric.

Eric was crushing the course, lapping us repeatedly as he racked up miles. He was a solid runner and a super nice guy, however, it sounded like he was just doing this for a training run and that the only reason that he bumped up from the 6 to the 12 was because only my wife and I had signed up for it. One of the times he was passing us he mentioned, “Hey if you guys want to call this early just let me know, I’m cool stopping whenever.” At this point I think we were all feeling a little silly having just three runners keeping a race open for an extra 6 hours.

My wife and I talked about it and decided to keep going for a bit longer, but that if any one of us decided to drop that we’d all probably call it a day. At the eight hour mark I took a solid 15 minute break as my wife and I talked about things. She was hurting bad and just wasn’t feeling confident that she wanted to go on any further. The rain had stopped a long time ago, and the sun was coming back out. The temps were predicted to climb back into the high 80s before we would be done. She decided that she was done. I looked down at my watch and realized I was at 30 miles, so I opt’d to go out for one more loop and knock out a solid 50K. 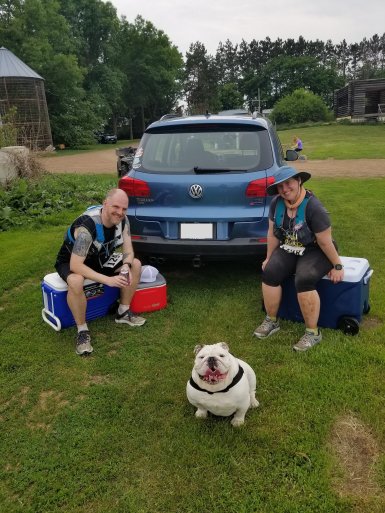 As I headed out for this final loop I found my body working really, really well. Maybe I had just adapted to the pain, but I felt like I could run again. I ended up running almost all of that final loop and knocked out a 35 minute 3 miler. That was almost as fast as my initial loops early in the day. Since this was going to be my final loop, I decided I had better leave everything out there on the course, and so I pushed myself to sub-11 minute pace as much as I could and crossed over the finish line with a few minutes before the 9 hour mark to spare.

With ~33 miles and 9 hours under my belt I decided it was a good day, and I was more than happy to join my wife in calling it done. That’s the beauty of a timed race like this. You can stop whenever you want and if you decide you’re done earlier than the bell, that’s totally up to you. I clocked in my second 50K of the year, only 4 weeks apart, which is light years beyond where I’ve been in previous years.

I probably could have gone on another three hours and finished out 40+ miles, but I wasn’t out there with anything to prove. I kept moving for 9 hours, completed a solid distance, and even found a second wind late in the day that propelled me to some solid running on tired legs. That’s one of the biggest ‘wins’ that I took away from the whole day; proving that just because you’re in pain at one point in a long race, doesn’t mean you’ll be in pain the entire race. Pain is temporary, and our bodies are often able to do a lot more than we think they can.

I’m incredibly happy with how this race turned out. I don’t know what is next for me, as I’m not doing any long term race planning this year. I’ve got my favorite 5K (Endless Summer French Park 5K) coming up soon, but other than that it’s all up to whatever I feel like. That’s one of the best feelings I’ve had as a runner in a long time, and it’s made all the difference in my attitude and enjoyment of running overall this year. Low pressure and running for fun. It’s what trail running is supposed to be about.