For the first time in four years, I had decided to forgo running any of the Zumbro Trail Race this year and simply volunteer the entire time. My wife had decided to make her first 50 mile race attempt this year at Zumbro, and I wasn’t sure what my goals for 2018 were going to be, so I opt’d to just sit by the sidelines and take care of runners.

Because I’m someone who is good at “running things”, the Rocksteady Running race director John Storkamp has asked me to run aid stations at a few different races. Last year I was the captain for part of the time, and this year John asked me to run it the entire race. Little did I know that this would not be as simple a matter as I expected. This year turned out to be the Zumbro of all Zumbros. This race is known to challenge everyone with it’s unpredictability but this year it was dialed up to 11.

We arrived on Thursday night, driving down with our friend Mark. We got the camper set up and headed over for the pre-race dinner and hanging out. It was a beautiful evening, and I wished the entire weekend could be as good as this. My wife headed to a hotel for the night to get in a good sleep before her big race, and I eventually excused myself and tried to get some sleep. I can’t say that I slept great, but I did manage to get a few hours of decent rest. I awoke in the early morning to the sound of rain, and from what we had learned in the latest weather forecasts, this was going to be a wet year.

I headed over to the start to watch the 100’s head out, and start my planning for the start/finish Aid Station 5. Zumbro is a looped course, and the 100 milers would be back to visit us in a little over two hours. Thankfully, I had a good crew of people with me, and after a couple last minute layout changes, we had everything ready to go with time to spare. Soon the runners started trickling in, wet, muddy and getting cold. Normally, I’m pretty tough on runners in my stations early in a race, but I decided to be a bit nicer this year and let my volunteers start some soup by mid-day. 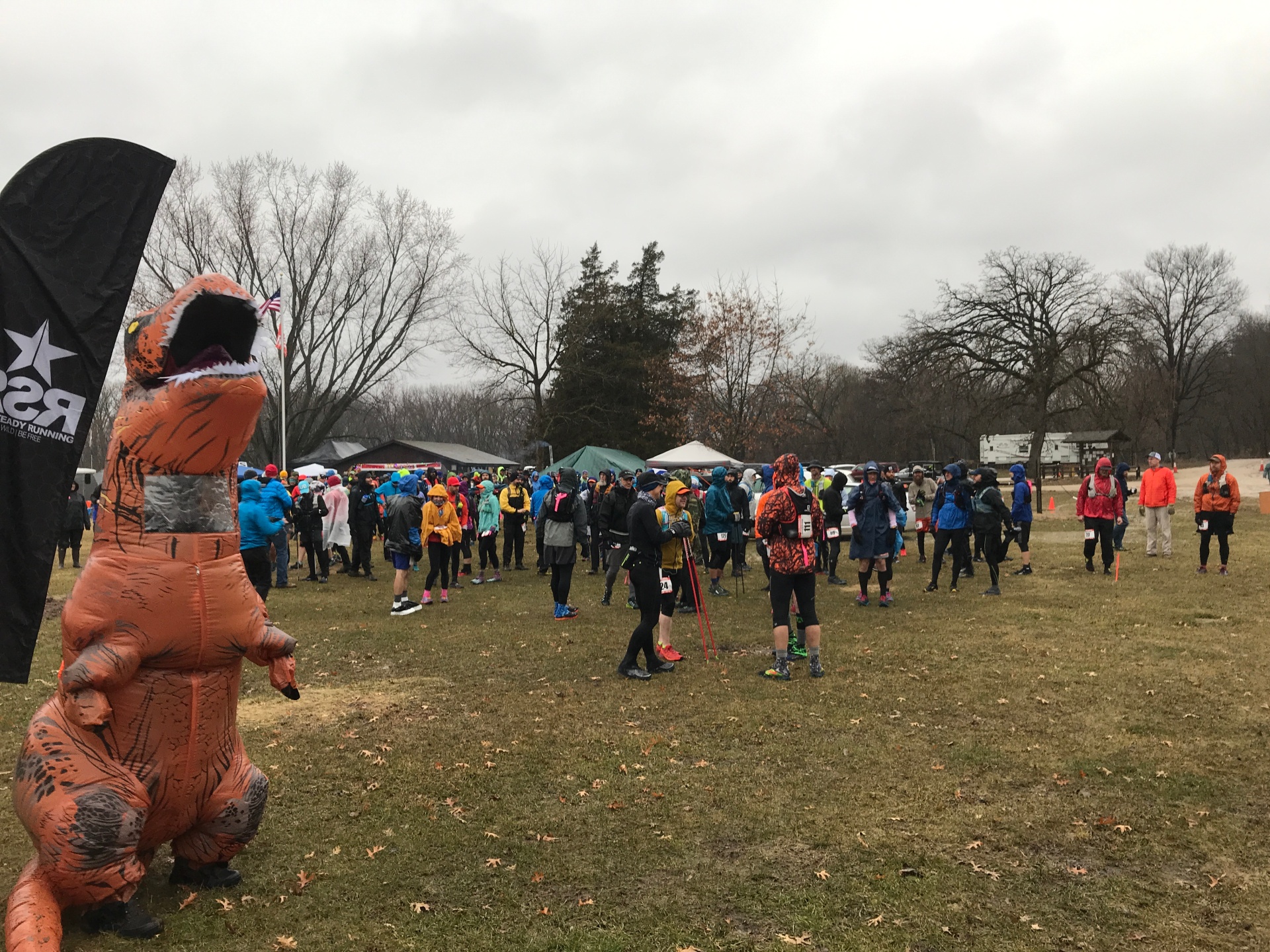 Soon, I had runners coming up to me to drop after a single loop. Zumbro is NOT an easy course, and this year was a wet, muddy, and cold adventure. I knew that the rain, which had lightened, was going to pick up again, but I really didn’t want to see people drop so early. I pulled out every trick in the book to try and get people to keep going for at least a solid 50K training loop. Only a couple folks actually took me up on the challenge and continued on.

Eventually, the rain and wind started to pick up even more, and we could tell we were in for a rough night. Eric showed up to give me some rest, and I went back to my trailer for a few hours. I wanted to try and get a little sleep before the 50 milers showed up and launched. While I rested, everything changed. By the time I came out of my camper around 9pm-ish the ground was starting to get covered in snow. The initial weather forecast had suggested the snow wouldn’t start until morning, but Zumbro had other ideas.

I altered my clothing strategy a little bit and headed back to the start. Things were running smoothly, and I made sure that new volunteers knew what to do. With a few experienced people, these things run themselves, but often new volunteers need some encouragement and guidance to learn the ropes. As the snow started falling heavier and heavier, things started to get more ominous. The winds had picked up and it looked like the overnight was going to be a near blizzard. Thankfully, the temps stayed in the 28-31 degree Farenhiet range, which helped a lot. Conditions were getting bad though.

Race Director John Storkamp made some announcements, and they were the most unique pre-race announcements I’ve ever heard. He said that things were getting rough, and that if anyone gets to Aid Station 1, and doesn’t feel like they have what it takes to continue, to please turn around and take the shortcut back to the start/finish. No shame will come on anyone who drops this year. On top of all the mud and water, the ice, sleet, and snow were creating tremendously difficult trails. When you toss in 40mph wind gusts, things get hairy.

The 50 milers launched, and we hunkered down for a long night. Since we were in a valley, we were shielded by the wind a little bit, Despite still getting major wind burn on my face, it wasn’t nearly as bad as it was out on some of the ridge lines. As things got worst, a decision had to be made about how to handle the conditions. John had a long few hours trying to decide what to do, but eventually make the 100% correct call to cancel the 17 mile race that was scheduled to start at 9am the next morning. The course was brutal, and getting to the Zumbro River Bottems area involved dirt roads, large hills, and pure white-out conditions.

As the early morning wore on I stopped pushing people to continue if they came in and wanted to quit. In fact we started telling people, who were on the fence, to call it a day. I don’t think I’ve ever worked a race where encouraging people to DNF is the correct thing to do, but in this case, it’s totally warranted. I’ll talk more about this decision to cancel part of the race in another post, but briefly, with conditions are bad as they were, and the ability of race volunteers to rescue stranded runners diminishing by the hour, the less people on course the better. If you came in and said your ankle was bugging you and you weren’t sure if you should do another loop… I’m telling you to stop. Even the ATVs were getting stuck.

As the day wore on we approached some cutoffs and pulled some runners before they could begin their final two loops. We got a respite from the snow, on and off, through the morning, which allowed us to get control of the situation again. We made some more adjustments to aid station arrangement to help control wind and started cooking lots of hot food to keep people warm.

Throughout the day I found myself turning in DNF numbers by the handful. Many runners, including my wife, would cross the line of one of their loops and say something to the affect that this was an amazing experience, and they can’t believe they succeeded that far, but that they were done and not going to head out for another. We gladly took their numbers, and told them to start driving home, very, VERY carefully. The roads were in horrendous shape.

By mid-day the snow started to pick up again and it looked like things were not going to get any better. We explained to runners that they needed to get moving, and couldn’t stay at the aid station long if they wanted any chance to get this done. We had no idea if we were going to have to stop the race early and evacuate people, and so dawdling was not an option. From a DNF perspective, this race was carnage.

Once everyone was on their final lap, we started to compress the aid station down to keep it simple, and out of the wind as much as possible. Things started to get packed up, since we didn’t need very many supplies for only 70 runners. Many volunteers headed out to try and start the long drive home, and for the most part everything got quieter. As the finishers started to trickle in, every one of them was greeted with hugs and words of encouragement about how amazing they were for finishing in these conditions.

Soon many of our friends who had continued, made it back and finished their race. As I looked at the weather I decided that I would have to get ourselves packed up and on the road sooner than I wanted to. I apologized to John and Cheri for bailing a couple hours early, but I knew that with almost no sleep for close to 40 hours, I needed to start making the drive before there was any chance of darkness.

The drive home is a story in itself, with almost constant white-out conditions. I drove for as long as I could and then my wife took over, once we were on main highways. We saw close to 50 cars in the ditches as we drove back. What should have been a nice easy 2 hour drive turned in to 3+ hours. We arrived home and had to dig out our driveway before we could even pull our car and trailer in.

Once all the nervous energy wore off, I ended up falling asleep hard. I slept solidly all night, and have already taken at least one nap today. My body is sore and worn out, and I actually dropped 3 full pounds of weight over the weekend. I also learned that PVC boots are horribly uncomfortable when you wear them for 10 hours straight.

Despite all of this, this was an incredibly fulfilling weekend. Despite hating that our Spring will never seem to arrive, the snow was beautiful and lovely. If I had energy and time, I would have loved to have gone out for a loop to check out the course myself. This is going to go down as one of the most epic and difficult Zumbros in history. Everyone who toed the line and attempted any distance, did something amazing. All of the volunteers went above and beyond by leaps and bounds to keep things running, in impossible situations. I know at my aid station alone I had a half dozen volunteers who couldn’t even make it out of the cities to come help volunteer, because of the road conditions.

This was a phenomenally difficult race this year. I’m thankful that we all came out of it unscathed, and grateful that I once again got so spend time in the presence of amazing trail people. I’m placing bets now that next year will end up being the hottest Zumbro on record and we’ll be facing yet another whole set of challenges.