2017 was another good year for me when it came to biking. I set a goal early in the year of matching last year’s total of just over 650 miles, and I’m happy to report that I met that goal. My 2017 total was 653 miles, which is just 5 miles shy of my 2016 total. Despite matching my previous year’s total in mileage there were a few significant differences with my biking this year.

My 2017 totals were helped by my more consistent riding on Wednesday nights for the Beer & Bike group. I managed to ride 6 more Wednesdays this year than last year, only missing 8 rides all season. I also managed to commute to work a couple of times this year, which I really hope to continue more of next year. 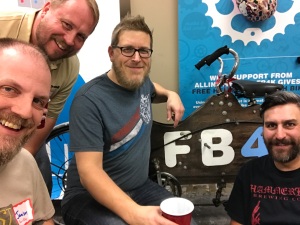 I also had a chance to get more involved in bike work this year. I did some basic maintenance on my current Trek, and volunteered at the Free Bikes for Kidz event, fixing up bikes. I’ve also started working on rehabing an old cheap bike to see if I can make some nice improvements to it to make it more comfortable.

I would love to commit to getting a fat bike in 2018, but I’m not sure I can justify the expanse. I would love to have a reason to extend the biking season into the colder months, but for now I’ll have to be content with just running in the winter. I also want to commit to more long rides in 2018.

I feel like I missed out on a lot of mileage this year that I could have easily gotten if I had just hauled my butt out of bed on a weekend morning. I also need to get my wife out riding more, as I think she only came with me on one or two occasions.

I’m looking forward to an exciting 2018 in the biking realm, and I have a lot of high hopes for what I can achieve. My mileage goal will be upped from this year, and I’m going to need to really commit to spending more time in the saddle, even when I don’t feel quite like it. I hope your 2017 involved some 2 wheel fun, and that you’re also looking forward to a great 2018!

Properly cold January run this morning. #trailrunning #icebeard
Finally spending a normal weekend at home and getting in a solid run at Elm Creek with the gang. Good to be in maintenance mode right now before training kicks in later in February.
Race report is live on the blog (link in bio)! This one's a bit long, but it was a long adventure!
So much to say about Tuscobia but right now I’m tired and am nursing an inflamed shin/ankle and drinking beer (with Mexican food). So thankful and amazed at how well everything went despite conditions. So many people gave me encouragement leading up to the race and during the race and I’m forever grateful. More to come soon!
Next up is the 2022 Biking year in review blog post (link in bio)! This was a great year to be on two wheels, and I've got a bunch of bike adventures for next year already in the works. #biking #gravelbiking
New blog today (link in bio)! My 2022 running year in review is up! Was a bit of a lumpy year, but had some great miles. Looking forward to 2023!
Loading Comments...
%d bloggers like this: