After working a couple days at the Superior 100 trail race, the wife and I wanted to ease back into reality slowly. We booked a campsite at Jay Cooke State Park for Sunday night, and after a nice breakfast at Betty’s Pies, we started slowly working our way south.

We stopped off in Duluth for a snack and managed to bump into a bunch of race folks, including Heather and Stephanie. It was a nice way to transition out of the weekend, seeing everyone slowly making their way home. We walked around Canal Park for a bit and enjoyed one last look at the water before driving a bit further south to the park. We had planned to do some biking on the Willard Munger Trail, and the folks at Continental Bike and Ski were happy to have us store our bikes there for the weekend while we worked the race. It wasn’t expensive and it saved us from having to deal with bikes hanging off the back of our car for two days up and down the shore.

When we got to our campsite we decided to head out on our ride first. Our destination was the town of Mahtowa, which sports a country store with homemade bratwurst. We grabbed a backpack and started towards the Willard Munger Trail, first having to climb the spur trail out of the park. That first uphill would be the least of our worries as the ride progressed.

As we merged with the Munger trail it became apparent very quickly that there was a stiff headwind, and after a half dozen miles we were feeling incredibly fatigued. We also forgot to get water before we left the park, so our empty bottles did us no good as we battled to gain ground towards our destination. It also did’t help that we discovered we needed to go a few miles further than our initial map investigation led us to believe, as the way points on the map were not exactly where we started from.

After 15.5 miles of brutal fighting we made it to the store. Inside we grabbed some food for dinner, as well as some snacks and treats for breakfast the next morning. We sat around for a bit and enjoyed a snack and filled our water bottles before heading back. We were hopeful that the tailwind would push us along easier, and thankfully, we were right.

The return trip was amazingly easier, despite being the second half of a 31 mile trek. Our return trip took a full 15 minutes less than the trip out, and we felt much better at the end. Which was good, because we still needed to get camp set up and start on making dinner. One of the annoying parts about a really short camping trip is setting up the tent for just a single night. It’s one of the reasons we look at little teardrop trailers from time to time as an alternative. We finally got everything set up and Lisa went about getting a fire going for dinner. 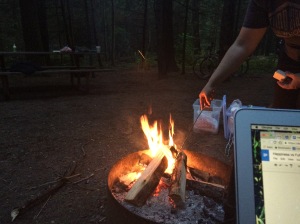 The brats were tasty, and we settled in around the fire for a relaxing evening. I took the opportunity to get some draft writing done on some future blog entries, while enjoying the quiet evening, and some delicious beer. However, the beer ended up being the source of a small problem as the evening crept on.

Since we didn’t bring a cooler, and it was Sunday, I opted to pick up a growler of beer from Bent Paddle brewing on our way out of Duluth. With the growler, I purchased one of their really nice insulated growlers that keeps the liquid cold for 24 hours. Normally, I can’t even finish half of a growler of beer before I’m at my limit. My plan was to drink some in the evening, and then possibly save a bit for lunch the next day, dumping whatever was left, since you can’t drive with an open container.

As the evening wore on I would lift the growler from the ground and refill the small paper up in my camp chair cup holder. Every time I picked up the growler it was sufficiently heavy, and the paper cup was small, so I never thought much about how many ounces I was actually drinking. Next thing I know, I pour the last drop of beer from the growler and realize my huge mistake. Because the growler is fully insulated it’s not light at all. Even when the growler was empty it had all the heft of a glass vessel, but somewhere in my mind I was expecting something as light as thin stainless steel. Additionally, since the paper cup I was using was so small, it never seemed like I was pouring that much beer at a time. Finally, the only thing I was doing was sitting in a camp chair and typing, so I never felt any serious effects like I would if I was at a bar.

All this to say that when I realized I had just downed 64oz of beer I started to panic. I knew that was waaaay too much beer for me, and I never drink that much. Thankfully, the beer I was drinking was a pilsner, so it was very low alcohol, but I knew this wasn’t going to end well. I went to the bikes and grabbed the water bottles to start flushing my system. By this point movement was more difficult than it should have been and I knew I was in for an uncomfortable night. Thankfully, it never came to the point of puking, but thanks to all the water I drank, I ended up peeing every ten to fifteen minutes for hours. I stopped being dizzy soon after drinking all the water, and fell into a fitful sleep where I was constantly being awakened by my bladder to step outside the tent and find a bush.

After a few hours everything settled down and I managed to fall asleep. Unlike our trip to Mille Lacs a month ago, the park was dead quiet, with only adults enjoying nature. We heard a few trains go by in the night, but otherwise, it was a perfect situation for me to sleep. The rushing river reminded me of a highway, and didn’t bother me in the slightest. As an added benefit to having to get up so frequently, I got to see all the stars in the sky in their amazing array. It was truly a beautiful night to be awake, despite not wanting to be.

I downed a few ibuprofen at 4am to stave off the eventual headache, and lamented that I wasn’t more careful to pay attention to the situation. I hate having too much to drink, which is why I have only been “drunk” a couple times in my life. I’m a puking sick drunk, which is never any fun. I enjoy alcohol responsibly and even when I’m out with friends, I often stop long before they do because I know how much I can handle.

Despite the rough end to the evening, it was an amazingly relaxing time. It was really nice to put aside real life for another day, and just relax, the two of us, out in the woods under the stars.

One thought on “Extending the weekend”