I had a day to myself today, and decided to hop on the bike and make an adventure out of it. I decided that I wanted to journey to a brewery, and I recalled how there was a bike path right behind Enki Brewing the last time we were there. I did some Google-mapping and picked a route that would bring me there, almost completely on bike path. I opted to start my ride from Lake Calhoun, since starting from where I live would have been a little excessive.

I loaded up my bike, drove down, and found a parking spot near the Cedar Lake Trail. My route would take me on the Cedar Lake Trail into Hopkins where I would pick up the Lake Minnetonka Regional Trail. I didn’t realize it when I set out, but the Lake Minnetonka Trail isn’t paved, but is crushed aggregate rock. I had been leery about that, but it ended up being just fine. The only downside is that it is not as quiet as asphalt, so I compensated by blasting choral music from my phone in my vest pocket.

I finally ended up in Victoria, MN after 21 miles. I grabbed a quick bite to eat at a local cafe, and by the time I was done Enki Brewing was open for the day. I had a quick pint, and then went over to the shore of Lake Steger to record my final day of the 22 push-up challenge. Once that was completed it was back on the trail for the return journey. I had a bit of a tailwind on the way back, which was good. My legs were starting to feel the burn of so many miles.

To break up the return journey I planned to hit a couple of other taprooms. When I got back to Hopkins I stopped into LTD Brewing company. I had never been there before, so I ordered up a flight, and found a couple of real winners in the mix. In particular, the blueberry blonde ale was spectacular. There was also a smoked, mint, coffee porter that was really unique. It was just a firkin, so I imagine it will be gone in a day or so, but it was really intriguing.

Once back on the road I opted for one more stop at Steel Toe brewing. This is a great place in St. Louis Park, and they have a really nice session IPA called Size 4. I relaxed and quaffed my final brew before making a decision. I would be finishing the day around 42-43 miles… why not just make it an even 50!

With that in mind I hit Cedar Lake Trail but instead of turning off at my exit, I kept going and merged with the Midtown Greenway. Somewhere around the Midtown Global Market I hit the turnaround point. I considered swinging up into the market, as there is another brewery in there, but I decided against it. There are also really good food vendors, and I would have probably destroyed all of the calories I burned today by eating a burrito the size 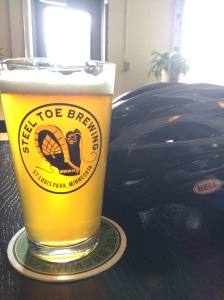 of a small baby.

I made my way back to my car at Lake Calhoun and packed up to head home. For those wondering, I did make sure to hydrate beyond beer on this run. I was wearing my running vest with bladder, and also brought along another bottle with Nuun-spiked water. By the end of the run I had drank 50oz of regular water, and an addition 22oz of electrolytes. I also had an egg salad sandwich at the cafe, an orange juice, and two Stinger Waffles. My nutrition management worked out really well overall.

I returned home and reflected on the day. I have some additional thoughts about bike paths in Minneapolis, but I’ll save those for another day. For now, it’s time to seek out a slightly-smaller-than-baby-size burrito…