No trip to Vegas ever seems complete without at least one visit to The Strip. For those unfamiliar with Vegas, The Strip is a couple mile long stretch of Las Vegas Blvd. where all the casino’s that you hear about are. The Luxor, Belagio, Ceaser’s Palace, etc. are all on The Strip. Unlike Freemont Street, The Strip is an actual road with traffic and cars, and in general, the casino’s are set back away from the road a bit. This gives The Strip a very different feel than Freemont Street. Where Freemont Street feels much like a state fair, with a festival atmosphere, The Strip is very polished and manufactured. They’re both fun experiences, but for different reasons.

We started our day yesterday heading down to the Luxor so that various people could check out some of the exhibits. In particular my wife wanted to see the Bodies exhibit, as she never got to see it when it was in the Twin Cities. Since I wasn’t interested in any of the exhibits I decided to go for a walk and meet people an hour later. This was really enjoyable for me as I just headed out the front door of the Luxor and started walking north on The Strip. I headed as far north as Planet Hollywood, to check out the restaurant we were doing for dinner, and then headed back. I did swing into Sin City Brewing’s little satellite location for a quick beer to go as I walked, one of the perks of Las Vegas. Then I took the little tram that goes between Excalibur, Luxor and Mandalay Bay to complete my solo adventure. 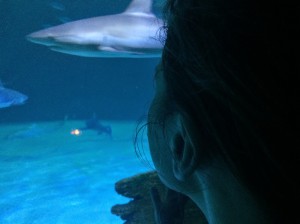 Once we all met up again we headed over to Mandalay Bay to check out their aquarium and shark reef. The aquarium was pretty decent, right up there with Sea Life Minnesota that we have back home, with cool tunnels through the tanks so you can see fish and sharks all the way around you. Everyone really seemed to enjoy themselves and it was actually a pretty reasonably priced experience. We then headed back north to get to the car so we could go park on the other end of The Strip.

We found a spot to park up by The High Roller, a giant Ferris wheel with observation deck pods that supposedly give you a tremendous view of the city as it rotates around. I hate heights so I had no interest in this attraction, but a couple of our party decided that they would go on it later in the evening before we left. From there we headed down The Linq to Planet Hollywood casino for our dinner. I really wanted to eat at one of Gordon Ramsey’s restaurants while we were in Vegas this time, and we selected Burgr to try. The first thing that I saw when we walked in was that the chef running the pass was Chef Christina Wilson, who was the winner of Hell’s Kitchen in season 10! Lisa and I were a little giddy to say the least, and if the restaurant had been a little less busy I probably would have asked for a photo to commemorate the visit. 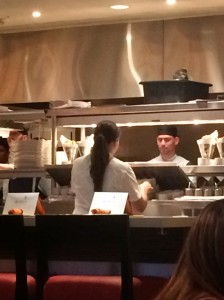 Of course we were there to eat, and so we all ordered up various types of gourmet burgers and dug in. Simply put, the food was amazing. I ordered a Blue Burger, which is simply blue cheese and arugula, however I also added some bacon, which at Burgr is made with duck breast, and it was super delicious. We left the restaurant with full stomachs and happy faces after an amazing meal.

Our next stop was across the street at the Belagio to see a water fountain show. We arrived in time to see it kick off, and it was a fun little display set to the song Lucy in the Sky With Diamonds. After this display we hustled up to the Mirage to catch the volcano show. I had never even seen pictures of this show so I had no idea what to expect. Turns out it’s a fire show with jets of flames all over the place, along with water shooting into the air, all set to a jungle island drum beat sound. The heat from the flames was really intense and it was by far one of the cooler displays I’ve seen in Vegas. 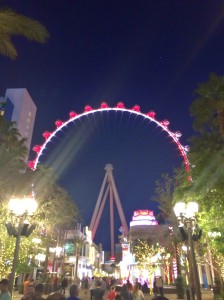 Once the show was over it was time to start heading back to The High Roller so that my wife’s brother and his girlfriend could go for their ride. The route to get there takes you down a very new part of The Strip called The Linq. This is a pedestrian mall that connects you to the backside of The Strip on the east side. My wife and I both agreed that The Linq was a great little area to just sit and hang out and relax and watch people. It was much quieter than the main drag, and was filled with fun restaurants and shops. We stopped at a cupcake shop so that we could enjoy some amazing deserts and then my wife and I settled in to relax for a bit with The High Roller ride was going on. However, we didn’t sit for too long since we had to use restrooms. On our way back from them I noticed a little shop that was centered around Polaroid. It looked mainly like a place where you can do fun photo montages and edits and have them printed and framed, but I saw a little word next to the sign that said …’museum’.

My wife didn’t notice this when I ducked in and thought we were just looking around at the kitchy stuff. I waved at her from the other side of the store and that’s when she saw that there were stairs to a second level which housed a museum devoted to Polaroid cameras and film through the ages. It was amazing to see all the old cameras that we remembered from our youth. In particular one that was memorable for me was the Swinger. My mom had one of these cameras, but by the time I came along it was pretty old and difficult to get film for. So she let me play with it as a toy camera. I remember playing with that camera all the time as a kid and seeing it again brought back a ton of great memories. Seeing all of the old Polaroid stuff made for a fun quick activity to wrap up our day.

After The High Roller people finished with their ride we headed back to the car and back to our room. I was sore and tired from the day and my wife offered to give me a little bit of a massage before bed. I ended up dozing off briefly while she was working on me, and fell asleep fast as soon as I could get ready for bed. Today is a relaxed day as we simply wait for our flight home this evening. It’s been a good trip, and I’ll write more about my travel thoughts tomorrow, but I am feeling ready to get home and sleep in my own bed again and see my kids and cats. Hopefully, our Minnesota spring warm up will still be there when we arrive!

Perfect morning for snowshoes at Locke Park, knocking down the couple inches of fresh powder from last night. Got a nice ice beard and followed what appeared to be fox tracks for a while.
-7°F (-22°C). It’s just a number. Don’t let numbers define you. #pithymotivation #runninginwinter #embracethecold
It's a sun dog kinda morning.
Run was windy as heck tonight but the moon was amazing
Got @that.lisa.k out on Silver Lake this afternoon. She did awesome on her fat bike!
Oof running in fresh snow is tough. Got a few miles in though on a pretty winter morning.
Loading Comments...
%d bloggers like this: