My 2015 training program kicked into high gear this morning with my first >10k run. Because we have a good half-inch of unplowed snow on the streets, I decided to give my recently purchased New Balance 1210 Leadville trail shoes their inaugural run. I also have a section of dirt trail about 0.8 of a mile long near my house, so I added that into my run as an added test. 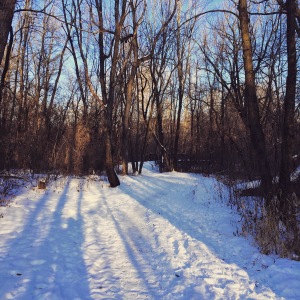 The funny part is that the packed snow on the dirt trail was actually much easier to run on than the slushy city streets. Overall, my run wasn’t the greatest I’ve ever done, and it’s apparent just how much fitness and strength I’ve lost over the holidays. You’d never guess that I put in 900 miles last year, tons of races and another marathon, while watching my sorry butt fall to an occasional walk today.

Enough about my attempt to get back into the swing of things. The point of this post is to talk about my shoes. I have a bunch of trail races coming up this year, starting with a 17 mile loop at Zumbro 100. The weather in April in Minnesota can be anything, so I felt like I needed to start trying out some trail shoes in winter conditions to get a good feel for them. 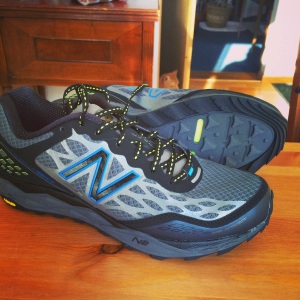 I picked up the NB 1210s on clearance, as they’re the v1 model. I find that shoes in the 8mm drop range work really well for me, so I was excited to try these, as there isn’t a ton in that range for trail shoes. Today’s run was a mix of snow, packed trail, as well as some asphalt. On all the surfaces I found the 1210s to have a decent amount of cushion, and after 7 miles my feet seem no worse for wear. The upper was moderately stiff, but that was probably due to my issue with the heel fit that I’ll talk about later. I also did not discover any hot spots or potential blister areas, which is always a positive sign.

These shoes gave me some decent stability, and on some miserable chopped up snow areas I never felt my ankles giving out or rolling. The treads were nice and aggressive, and traction on these rough areas never seemed to be an issue. In particular I found the edge treads to be quite nice for gripping as my feet were slipping sideways.

My only complaint about these shoes was the initial heel fit. When I first put them on, the back of my foot was slipping out of the shoe. It was only once I had tapped my foot into the heel tightly, and laced up one higher notch that I was able to get them to fit nicely into the heel. As I mentioned earlier this required me to tie up the laces tight and that made the upper feel a bit stiffer. For the seven miles that I was out there today though, I had zero issues with my heel slipping. So my advice is to take the time to get the fit right before heading out for a first run.

Overall, I’m quite pleased with these shoes. They were a good price and I will seriously consider the v2 shoes for later in the year once I’ve worn these ones out.