One of the simple pleasures in life is the ability to put new cushion covers on IKEA furniture. Yes, that’s right. I just said that. 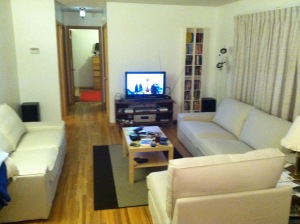 On Saturday the wife and I headed down to IKEA to grab some new cushion for our Kivik couch and loveseat. When I bought these couches in November of 2011, my kids said they liked the beige color, and since they were the cheapest, I went with those. It’s now 6 years later and the occasional stains from teenage boys has finally caught up to them.

So now, we have some lovely green/grey covers, which are also made of a bit nicer material than the original beige ones I had. In fact they were even sized just slightly bigger, and were ten times easier to put on. We added some nice new accent pillows and they look really nice. I’m happy we got this done for Christmas, since we have family coming over, and now we don’t have to be embarrassed by our old stained furniture. Much easier than completely repurchasing new couches. Thanks IKEA!