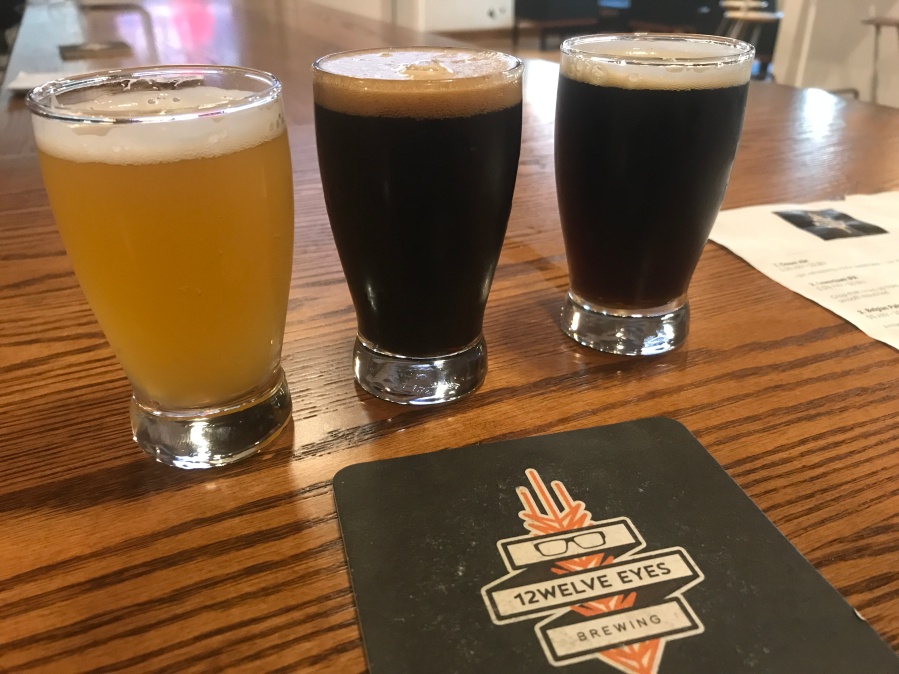 I recently got to sample the latest brewery to open up in downtown Saint Paul: 12welve Eyes Brewing. This is a new brewery started by three gentlemen who all wear glasses, hence the name about 12 eyes. They are located in the historic Pioneer Endicott building, in the garden level. Because of this, they are the only skyway connected brewery in Saint Paul. With the boom in housing in downtown Saint Paul, this feature alone will help them generate a solid crowd of regulars.

I got there just as they were opening up in their first week of business. I took a seat at the bar and ordered up three small sample sizes of their 11 brews that they had on tap. I have to say that starting a new brewery with so many beers is a gutsy move. One of the biggest issues I’ve found with new breweries is that they get over ambitious and lose sight of quality by trying to do too much too soon.

Before I talk about the beer, I want to make one comment about the space. One of the key components in a great experience at a taproom is being able to order your beer as efficiently as possible. Many taprooms that I have been to have beertenders behind the bar taking orders wherever people can squeeze through and order. Or perhaps they pull aside a couple of stools to made a space, but it never feels like you know where to go to order. I incredibly happy to see 12welve Eyes has learned from others, and corrected this in their design. When you walk into the brewery, the entire end of the bar is dedicated to serving up beer without disrupting people sitting along the sides of the bar. It helps create a nice easy flow for people ordering.

However, I chose to sit at the bar, along the side, to enjoy my brews. The first brew I sampled was their lemon hefe, and wow was this one a winner in my book. They use lemon puree in it, and it created a beautiful, rich, lemon flavor. I don’t think I’ve ever had a beer quite like this one, and I could see enjoying this one again. I hope this one becomes one of their staple beers.

I then moved on to their Black IPA. This was well balanced, though not as hoppy as what most people consider a IPA (even a CDA version). It was still really pleasant and enjoyable and well brewed. I finished off with their brown ale, which was very delightful. It is brewed with oats which gave it a very unique character for a brown ale. It had a smooth finish, similar to much bigger beers, but with a lighter feel of a brown. Overall, I think it worked.

All the beer I sampled was well brewed and contained no flaws that I could detect. This was a pleasant surprise with a new brewery with so many taps flowing. 12welve Eyes is committed to being a nice local brewery for the area, and I think that they’re on a winning track. They have a nice taproom and a solid beer list. I’m looking forward to trying them again very, very soon.