This year was my strongest year of running so far. I set out at the beginning of the year with some lofty goals, and although I didn’t meet all of them, I still crushed some of my previous records. This was a year of challenging myself to distances I had never attempted before, and finding new ways of giving back to the trail running community.

My big goal race of the year was the Zumbro 50 mile trail race. That meant my training started in earnest in December of last year. I decided to follow a training plan from Relentless Forward Progress, and overall I was happy with the structure that it laid out. I wasn’t nearly as diligent on my cross training days as I should have been, but I felt very strong going into the race.

However, before Zumbro I had one other bonus race; the Blood, Sweat, and Beers race in Boulder City, Nevada. This was a 13 mile race through Bootleg Canyon, on rugged desert terrain in February. I went into the race thinking it would be no big deal, but all my winter training actually set me up for a tremendously rough day in Nevada heat. I managed to finish in around 3 and a half hours, but ended up passing out from heat exhaustion at the restaurant afterwards. Needless to say, not the way I wanted to start my race year. 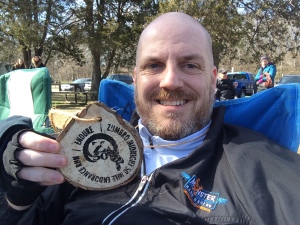 Once I was home and recovered I fell right back into training, and ended up putting down a great 50K during a local fat ass. Soon enough race day was upon me, and I joined with a bunch of other poor souls at midnight to go for a jog in 17 degree temps. I completed the 50 miles in just under 16 hours, and it was one of the most amazing experiences in my running career. Seeing my body get a second wind during my third lap, and actually being able to run across the finish line was tremendous.

After my achievement at Zumbro I had a couple of 10K trail races before hitting the Spring Superior 50K. It was at Spring Superior that I came face to face with the dreaded DNF. It was a hot one this year, and my body just couldn’t cool down. With memories of Nevada in my head, and a desire to avoid puking my way up and down Moose Mountain, I dropped at the last aid station. It wasn’t how I wanted to go into the summer months, but between the 50 mile hangover and the heat, I just wasn’t up for it. This is now my target race for 2017 to get revenge.

June found me doing a couple of pavement half marathons, despite being my lowest month of mileage all year. The North Olympic Discovery Marathon was an interesting addition to our Seattle trip, though I wouldn’t bother with it again. The funner one was the Garry Bjorklund Half Marathon during Grandma’s Marathon. I felt great that day and had a really good race, and celebration with friends afterwards.

By this point in the year all the early training had caused me to peak back in April, and summer months found me running less and less. I did the Afton 25K and a few small races, including a local 1 miler. The season finished up with a few more smaller trail races, and a 21 mile run at the Grand Traverse. My goal was to finish with a strong 50K at Surf the Murph again, but after one loop I decided I was done with racing for the year and hung it up after a 25K loop.

Although it seemed like my year fell apart towards the end, I still managed to blow away a ton of goals. Beyond the 50 mile finish (first time ever), I will still finish the year very close to 1200 miles. I won’t know the final number until Saturday, which is my final run of the year, but it should be right around 1170, which is over 50 miles more than last year. The fact that I was able to put down two 1100+ years in a row is very impressive to me, especially considering I just started this craziness 6 years ago, and before that wasn’t athletic at all.

The biggest surprise this year came when I checked my veloviewer graph for elevation. Before I started trail running my best elevation year was 2014 with 14,000 feet. As I transitioned to trails in 2015 I knocked out a 33,000 foot year. However, in 2016 I blew the doors off of everything and smacked down a 57,000 foot year. When I first looked at the graph I actually couldn’t believe it. That was a major jump in elevation, and it made me feel a lot better about the fact that I was doing almost the same number of miles as 2015, but almost twice the elevation. 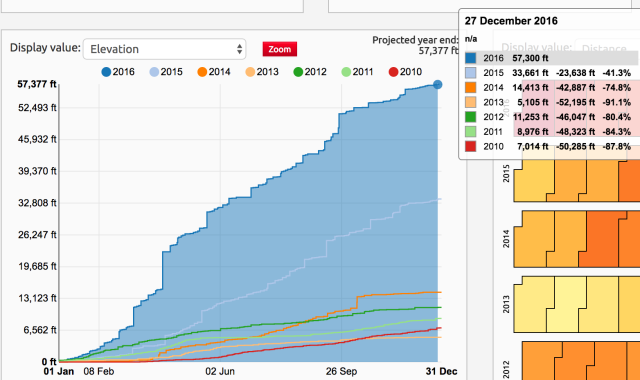 In many ways that was the story for me in 2016. I have fully embraced the trails, and much of my running is about conquering the mountains in my way, not speeding down the road to the finish as quickly as I can. It’s made my running more of an adventure, seeking out new challenges. In road running I would often challenge myself by trying to get faster and faster. On the trails it’s more about conquering a bigger hill or a longer trail. It makes this craziness more doable to me, mentally. It gives me goals that my aging body might be able to achieve, instead of just trying to push myself to get faster and faster. 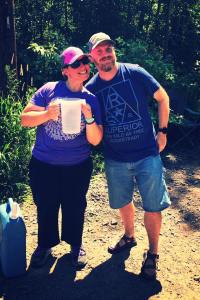 This year has also been a big year for me in terms of getting involved in the trail running community around the cities. I love volunteering at races and my wife and I spent time working at multiple races this year. I had intended to run a few of the Endless Summer Trail Run series races, but ended up volunteering for 3 out of 4 of them. We spent some time volunteering at Voyager, which was a ton of fun. Fall Superior has become a service event for us now, with running the aid station at County Road 6, and my wife working at Sawbill while I paced a 100 miler. I also put on my first fat ass at Elm Creek this fall, and had a close to 50 people show up for some fun on a snowy morning.

To top it all off I was also elected to the Board of Directors for the Upper Midwest Trail Runners Association. I hope to be able to use some of my experience working in government and politics to help get trail running working with parks to make sure we all have a great experience. I’m really looking forward to working with a bunch of great people to give back to the community that has given me so much.

As I look forward to next year, I am excited for the things I have planned so far. I feel like every third year or so I need to dial things back a little bit, so there are no 50 mile races planned for me. I have a couple 50Ks on the docket, but otherwise I’ll probably just be volunteering and running some smaller races. I’ll probably lower my distance goal down a bit, and I would expect my elevation to drop as well. I want to make sure I keep my body from getting too beaten up, as I’d like to continue this passion for as long as I’m able. I see so many older folks out there still going strong and pounding out the trails, and I want to be one of them someday.

For now, it’s a time to celebrate the great accomplishments of 2016, and be happy with all that I’ve accomplished. It was a great year for running, and I’m excited to keep it up again in 2017.