Monday night I sat down at my computer one last time before bed to check in on things, and noticed a tweet from Wil Wheaton. He stated that he was starting up a twitch stream and doing a Choose Your Own Adventure book live. I clicked into the stream as it was starting and got to be a part of the audience as he read through the story, giving us chances to vote on the choices from the book. It was a great time and absolutely hilarious when most of us chose the wrong choice and ended the story earlier than we expected. We backtracked a step and got to a much more satisfying ending.

It reminded me about how much fun these books were as a kids. I would go to the library and check out 2-3 of them at a time to read and enjoy. I loved picking the various options and seeing how bad an ending I could get sometimes. It was a great memory as a kid, and these books really unlocked my imagination as I put myself into the story and made it my own.

Monday night was a lot of fun, walking down memory lane and re-living some of the ways that we found to interact with a story before video games really made that possible.

I came late to the party with reddit. It wasn’t until a year or so ago that I even made an account and started following subs. This year I decided to join in with the Secret Santa tradition that reddit does every year. Last night I filled out my profile, and Tuesday I find out who I’m sending a gift to.

I’m actually a bit excited at the idea of shopping for a total stranger, based solely on what they’ve shared in their profile. I try to always be a creative gift giver, thinking about the person I’m giving to when I pick something out. My wife will attest that often I’m getting her something cheesy and funny, or meaningful and homemade. I feel like the things I truly want I can just purchase for myself, as many people can. It’s in the act of thinking about another person that I can be creative in my gift giving.

Wish me luck as I try to come up with something cool!

I grew up as a child of the 80’s, and apart from big hair, REM, The Cure, and leg warmers, the 1980s were also marked as a time of fear about the Cold War. The Cold War was unlike any other conflict in history as the U.S.S.R. and the United States engaged in a global stalemate with the constant threat of nuclear annihilation hanging over all of our heads. As a child this was actually a very frightening time to live. I think many would ponder if the weird rebellious nature of 80’s culture was a reaction of youth living with this underlying fear in their lives.

Unlike a ground war such as Vietnam, there were no daily body counts in the nightly news, or stories of advancement through enemy lines. Instead there were reports of small conflicts in backwater areas of the world, and news headlines about the latest in Star Wars Defense Systems to keep us safe. Every child became familiar with the term “Mutually Assured Destruction”, which both terrified us, and kept us assuaged that no one would ever launch a first strike, because it would mean the end of life on earth.

The world has changed, and the Cold War appeared to end with the fall of the Soviet Union in the 90s. However, there was one last holdout of the era of Cold War politics right in our backyard: Cuba. This weekend Fidel Castro passed away, and the end of the Cold War era truly passed into history. Despite many years of reform and softening relations between the U.S. and Cuba, it really wasn’t until Castro’s passing this weekend that it drove home the point to me that it really was truly, and finally over.

That’s not to say that we don’t face threats today. Extremist terrorism is the new global threat, and our children are growing up with a fear that is different that mine, but still fear. Instead of looking to the sky to see if missiles are going to rain down on you, our kids are looking at the people around them in a crowd and wondering if they are a terrorist who wants to do them harm. My hope is that when my kids are my age, that we have moved beyond this scary time and that they can also ‘look back’ at the fear of their youth and feel confident that it has passed.

For now I will feel a final sense of peace that the fear of my youth is no more, and look to helping make the world a better place for my children, so that perhaps future generations can grow up without a sense of fear.

Most years I go along with the tradition of not shaving in November. I don’t do it for any charity or anything like that, but mostly just to give my head a rest. It’s always interesting to see how much hair I don’t have on my head by the end of the month, as my receding hairline seems to get thinner every year. It’s also odd needing to use shampoo during this month, since my hair is just long enough to need it. For a brief time every year my head smells like coconut.

Next week it comes to an end however. I’m considering trying some of those dedicated head razors. I’ve been nicking myself quite a bit lately, and I’d rather avoid spilling any more blood on the back of my head. It’s may sound odd, but there are a large segment of men who would happily undergo a treatment that removes our hair permanently, as opposed to all these baldness treatments that are going around. I’m sure whatever they’d come up with it wouldn’t be the healthiest option though…

The second place that my wife and I hiked over the weekend was at Tettegouche State Park. I hadn’t been to Tettegouche in a LONG time. I remember in High School taking a hike up the Baptism River to High Falls with some friends, but it had been ages since I had been there.

This weekend I got to see the falls again, and this time I had my good camera with me. I’ve enclosed a sample below, but since I don’t want to use up all my space on WordPress, please check out this link to my Flickr album for the full set: https://flic.kr/s/aHskHdV6AF 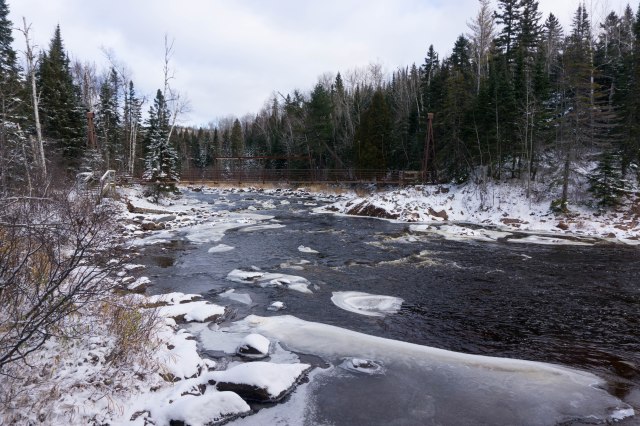