On Labor Day this year, the wife and I did our annual State Fair visit. The weather was nice and pleasant so we decided to spend a bunch of time just walking around to exhibits that we don’t normally visit. This led to some spontaneous shows that we had never seen, that really made the day a lot of fun.

We started at a dog obedience exhibition where the dogs were going through agility courses, showing off their training. It made my wife want a dog even more at some point in the future. From there we moved through the energy exhibit, fine arts, and creative arts buildings. We saw a dress that a friend made and won a ribbon on, as well as some amazing glass work that was tremendously impressive.

The next stop for my wife was the horticultural exhibit, which she enjoyed while I had some beer (more on that later), and then a quick stop at the Minnesota United FC booth, before heading to the animal barns. On the way to the barns we got sidetracked with the Natural Resources building, where a falcon and owl show was going on. We even ran into a great running buddy of ours as we watched the show. 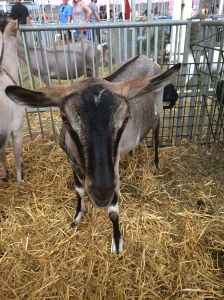 At the barns we got to pet a bunch of cows and goats, and watched as some of the horses prepared to enter the arena for some form of barrel racing. Goats are a ton of fun to pet as they basically act like a cat or a dog and want attention from you. We finished the exhibits with a visit to the heritage museum, reading about all the deep history of the fair over the years.

In terms of food, we managed many of the regular treats, like the Fudge Puppies, bacon on a stick,  and mini-donuts. We also got a few other odder treats like deep fried grilled cheese (which satiated our need for cheese curds) and scotch eggs. Of course no visit would be complete without bringing home a bucket of chocolate chip cookies.

I also managed a bunch of different beers, some better than others. I grabbed a S’More’s beer that was basically a porter with chocolate on the rim of the cup and a marshmallow floating in it. If you ever try this beer, do yourself a favor and don’t eat the marshmallow, it was disgusting. I got a nice flight of beers from the MN Craft Beer exhibit that featured a cider radler that was very refreshing. Once we got done with the DNR building I got in line for the Chocolate Chip Cookie beer. Although it was a decent pale ale, I was disappointed with it, since I got almost no sense of cookie flavor from it. Not something I’d try again. Before leaving I grabbed the Schell’s Blu beer which is a lager mixed with blueberry juice. It was nice and sweet and a great way to top off the day.

Going to the fair this year ended up being a lot of fun for me. We took our time and experienced more than just food and beer, and it made it feel a lot like when I went to the fair as a kid. I would just wander around and see what people were showing or demonstrating and kill time watching interesting things. This year brought me back to those memories, and made me excited to go again next year and experience even more.