Saturday began our longest vacation ever, as we journeyed by train to Seattle, WA to take in the sights, relax, celebrate, and do some running. This trip actually serves as a belated honeymoon for my wife and I. When we got married in 2013 my wife had just started going back to school and so a long trip for a honeymoon wasn’t in the cards. We spent a couple days on the North Shore, but that was about it.

Now that she’s graduated, but still in her job hunt, we decided that this would be the perfect time to take our trip. We started planning quite a few months ago, and my wife discovered a marathon out in Port Angeles, WA that she wanted to run as part of the trip. We also decided that we wanted to experience traveling a bit differently, so we opted for taking the train out to Seattle instead of flying. We’re planning in flying back though, since the trip by train takes almost 40 hours.

The trip began Saturday evening with our oldest son dropping us off in downtown Saint Paul so that we could get some dinner before boarding the Amtrak train at the newly renovated Union Depot. We opted for a nice big sleeper car, that has it’s own bathroom and shower in the room, and we do not regret spending the extra money on that at all. It was incredibly comfortable for a multi-day trip.

After boarding, we got to our room and our attendant got the beds made up for us. Originally we were going to try and fit both of us into the slightly larger bottom bunk, but it was just too cramped, so Lisa moved to the upper berth. Sleeping on a train was a new experience for me, and it took me quite a while to be able to settle down and get used to it. The train was relatively smooth, but it rocks back and forth, and you can feel when you go around curves. Letting your body relax and not panic every time your bed slightly shifts was a challenge, but I managed to get 3-4 hours of sleep that first night.

All day Sunday was a travel day on the train. We awoke in the middle of North Dakota, and made it all the way to Whitefish, MT before we headed to bed. The dining car provided all of our meals, and we had brought some snacks with us to keep the munchies away. I also brought on a few beers and we spent the all day Sunday relaxing and watching the scenery pass us by.

We also brought a bunch of things to keep us occupied, such as board games and books, since there wouldn’t be consistent internet signal on the trip. However, we often found that we just liked sitting by the window and watching the countryside. It was really neat to see the landscape change as we moved from area to area. The flatter terrain of North Dakota disappears into rolling hills once you pass Minot. Montana had a bit of everything, and eventually the mountains of Glacier National Park. 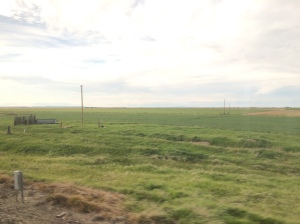 Much of the land out here is unused and wild. The terrain is rugged, yet there are still signs of life in small settlements dotting the horizon. Most of the towns where we stopped we small backwater burgs with a few random buildings and some houses that spread outside of town. They were quaint and quiet havens where people are doing life, in their own way. Growing up in the city I always had a hard time picturing how people could live so far and isolated from others. Yet, for many folks, they couldn’t imagine any place they’d rather live.

The final night on the train came early, according to the time on our clocks, but that was mostly because we’re shifting time zones as we head west. We will gain another hour of time overnight as we slip into Pacific time, which will hopefully help give us a bit more rest. I’m sure I’ll probably just wake up extra early as we start our first day in Seattle on Monday.