Another new purchase for my 50 mile race was a set of trekking poles. I had never bought any before, but thanks to some friends, I had a chance to try some out during my training. I had a couple of criteria for what I was looking for. First, I wanted it to be lightweight, as I didn’t want to struggle with anything too heavy during a race. Second, I decided that I would rather have extending poles, instead of fixed length, fold-up ones.

I made this second choice for two reasons. I wanted more flexibility in the length of the poles so I could adjust them as I learned to use them and discovered what was comfortable for me. I also read a lot about how the fold-up poles can sometimes pull apart if they get stuck in mud. Since most of my races (that I would use these for) have mud, I wanted to avoid that potential problem. Perhaps it isn’t really a problem, but I didn’t want to take chance.

I ended up deciding on the Black Diamond Trail Pro Trekking Poles. They were expanding poles, and I could get them without all of the shock absorbing technology that, while cool, just adds more weight to the overall product. They were delivered shortly before my race, and I pulled them out for my third loop of Zumbro.

These poles performed really well for me in the race, and I am very happy with them. I used them for difficult, technical climbs, as well as the descents on the other side. I also found myself using them when I had fallen into my 40+ mile run/hike/shuffle. I was able to get myself into a really good rhythm of putting both poles out in front of me and then pulling myself up and forward, kinda like crutches. The wrist straps allowed me to put as much pressure as I needed on my arms to help propel myself forward.

From a construction standpoint, I couldn’t find any failings with these poles. They are strong and durable, and I never felt like they wouldn’t sustain the weight I could put on them. The hand holds and wrist straps are comfortable, and I was able to adjust the wrist strap length to suit my needs. Although some shock absorption might have been nice for some of the rockier sections, I never felt like my arms were shocked hard when I hit a rock.

Since these are telescoping poles, I was curious about the strength of the locking mechanism. It’s a hinge style lock, that feels very firm and solid to operate. Once I locked the poles into the height I wanted I never once felt like they were going to come loose or shorten over time. They were also easy enough to operate that I could adjust them in my very tired state heading out for my third loop. The markings on the telescoping portions were clear and easy to line up, getting me the length I wanted right away.

If I were to make one small complaint about these poles, it is that I couldn’t fit them into my drop box. They’re just a hair too long for a standard plastic bin that you might see at a drop station. I realize that’s one of the 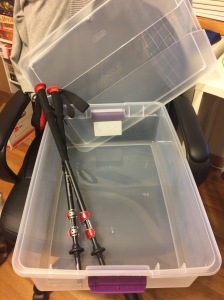 trade offs with an expanding pole vs. a fold up one, but it does leave me still searching for a good way to attach them to my drop box.

This is the second Black Diamond purchase I’ve made for my 50 mile race, and both of them have been really solid. If you want a really good trekking pole, then you can’t go wrong with something in the Black Diamond line. I had a friend of mine pick up the Z-pole fold up version, and he absolutely loved it as well.

Now that I have these poles, I guess I need to start signing up for even more long runs!