Hot and humid. Those two words best describe the 2015 Lebanon 7 mile run. We arrived at the start to an air temp of around 86(F) degrees with a dew point of 66(F). Most of the runners were hiding out in the shade of big trees and the pavilion, trying to stay cool for as long as possible. I ended up getting in a pre-race jog after buying a t-shirt and running it back to the car, and just that small bit of exercise had me sweating and sticky before even lining up for the start.

This race was also the occasion where I got to meet more people in real life, beyond various Strava and Facebook groups. One guy in particular, Adam, and I had been running a lot of similar races over the past 9 months, and so after connecting on Strava realized that we should probably say hello at Lebanon. I found Adam sporting an ice wrap around his neck and after meeting a few more of his friends, we all headed to the start line. My wife also was racing last night, but since she knew the distance and heat would get to her she lined up closer to the back. 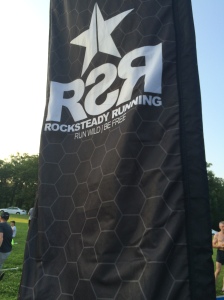 At the start line John Storkamp gave his usual pre-race instructions, told us to all turn to someone next to us we didn’t know and say hello, and then launched us on the trail. Adam and I are a similar pace so we started out together and managed to stick together throughout the entirety of the race. At first we were running side by side, but eventually the trail skinnied, and in the interest of letting people get past us easier, I decided to drop back into a rabbit chasing position behind Adam.

Lebanon is mostly easy running trails, with a hard packed surface. There was a bit of sand for the first quarter-mile but thankfully that didn’t stick around long. Normally 7 miles isn’t a big deal for me when it comes to hydration, but given the weather I decided to carry my handheld. I drank about a third of the bottle during the first half of the race, but most of the bottle ended up poured over my head in a noble attempt to avoid overheating.

Once we hit the halfway point aid station I refilled my bottle and we headed back out as quick as possible. The south side of the trail seemed to have many more hills and we ended up doing a bit of on and off hiking for miles 4-6. The south side of the park also had a lot of fern-style foliage and was really beautiful to run through. For the most part the second half of the race was uneventful, and we managed to keep up some level of conversation despite both of us slowing from the heat and hills. Another friend of mine, Corrie, passed by at one point and joined us in some shared griping about the weather before moving on ahead.

Perhaps the most humorous part of the evening was when we came across the course photographer. She was snapping pictures near a bridge, but when Adam and I passed by she was having some camera difficulties. About 50 feet later she comes barreling down the trail, passing people left and right, to set up a new spot so that she could snap shots of all the people that she missed. We joked with her that we would happily slow down to let her get set up! She got ahead of us and we gave her some big smiles as we passed. Can’t wait to see those shots.

There is one final hill as you come out of the trails to the parking lot that I ran during the 10K, but decided to give it a big middle finger this time and hiked it. As soon as we hit pavement Adam started a kick and it took everything left in my body to keep up with him. We managed to cross at the same time (despite a 2 second difference in the official times…) and the beginning of the cool down process began. FYI, ice sponges are amazing after a long hot run. 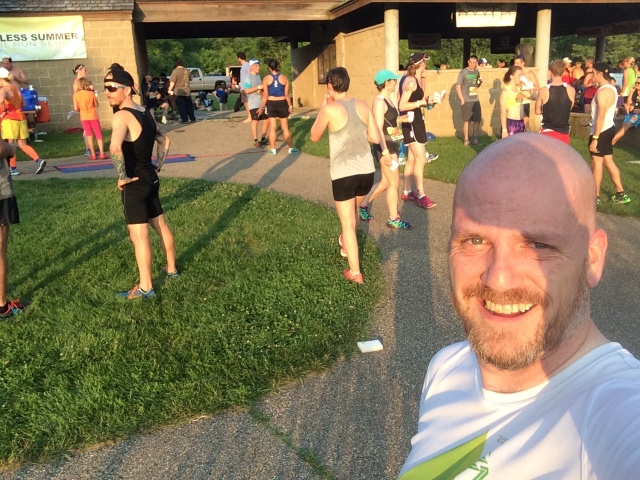 I wandered around and grabbed a beer to wait for the wife. She crossed close to her goal time, though she had a somewhat tougher race than she hoped for. We stuck around for the raffle drawing, ate some pizza, and I played with some of the Suunto watches on display for a couple minutes before heading home. I love the Endless Summer Trail Series, every race has been an awesome time, with different challenges and courses each time. The swag is fun and different from other races, and the people are amazing. I’ve managed to meet a lot of new people in this crowd and love meeting more of them every race. Next up is a 7 mile race at Hyland Park in Bloomington. Since it’s in the middle of August I’m betting weather will once again be a factor, but I’ll still be there ready to have a great experience.

Now if I can only convince John to host an ESTR race up at Elm Creek for us north metro folks….